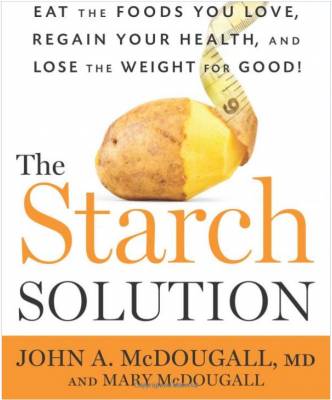 You will absolutely love this one-hour presentation given by Dr. John McDougall. Based on the latest scientific research, Dr. McDougall passionately describes in detail why human beings thrive on consuming a starch-based diet. His message affirms that, "All large successful populations of trim, healthy people, throughout verifiable human history, have obtained the bulk of their calories from starch."

Dr. McDougall demonstrates this fact by walking us through a historical understanding that takes us far back in human history. He also clarifies how the popular "hunter-gatherer" theory of the Paleolithic diet originated. He explains how older archaelogical digs performed 70-150 years ago led us to believe that ancient man was predominately a hunter-gatherer, with the emphasis on hunting. This was due to the fact that examination of ancient village remains consisted of finding bones and tools made out of stones around fire pits. Cuts on the bones were thought to have been made by the stone tools. Dr. McDougall jokes that no potatoe skins or orange peels were found! Since then, more modern and sophisticated archaeological methods have replaced antiquated techniques, by searching for more minute details.

Today's modern Paleo diet bases their beliefs on the theory that the European Paleolithic diet consisted of mainly animal foods and no grains. However, Dr. McDougall's archaeological research shows that, "Starch grains from wild plants recently were found on grinding tools at archeological sites that have been dated back to the Paleolithic period in Italy, Russia, and the Czech Republic."

One of the illustrations Dr. McDougall uses which validates his point, takes us back to villages in the eastern coast of Africa, that is now known as Mozambique. Recent research now suggests that their diet was based on the cereal grass sorghum. His illustration shows that s tarch granules called amyloplasts "were retrieved from the surfaces of stone tools from Mozambique, showing that early Homosapiens relied on grass seeds, including sorghum grasses. These data imply early Homosapiens from southern Africa consumed not just underground plant staples, but above-ground resources too."

Dr. McDougall uses many other examples of ancient starch eating populations as well as more recent ones including the Gladiators, Roman soldiers, Alexander the Great, and Genghis Khan. He concludes his presentation by stating, "Throughout civilization and around the world, six foods have provided our primary fuel; barley, corn, millet, potatoes, rice and wheat."

Watching this presentation will be well worth your time. Education is the key factor in making needed changes for our health and well-being.

(1) The Paleo Diet is Uncivilized

The consumption of wholegrain is related to depressive symptoms among Chinese adults: a cross-sectional study