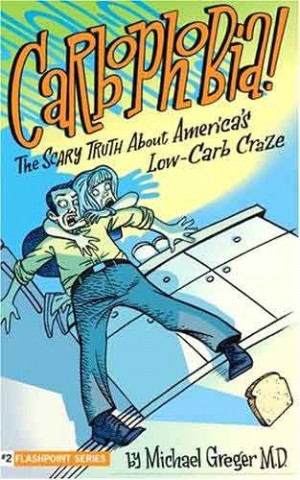 Carbophobia as defined in the Urban Dictionary is “An irrational fear of element 6 of the periodic table (aka carbon), from which all organic life is based. …Currently a source of great hysteria. Carbophobia has reached such levels it’s become its own religion.”

While that definition is just as wee bit tongue-in-cheek, I think there is also a lot of truth to it. Every day in my discussions with would-be or new vegans, they “confess” to (what they think of as) a guilty pleasure in eating foods high in carbohydrates like potatoes, rice, whole grain bread or pasta. I remember living with that fear and I feel badly for them.

For me as their mentor, it’s a bit like being a midwife at a difficult first birth, only with carbophobia, the “mother” may be female or male of any age. The “baby” is the healthy new life of freedom from illness and obesity they are struggling to bring forth. Instead of the limitations of the flesh however, they are battling all the fears and negative information they have been fed by much of society, authority figures and certainly, the powerful meat & dairy industries.

They want to eat a plant-based diet; and they are afraid to do it. They may have read some of the literature or may have tried eating low-carb enough to personally understand that it is a no-go. Even so, they have internalized the prohibition on carbs and find it difficult to trust this “radical” approach, that is to say, eating whole plant foods, loaded with carbs!

“I’ve read the McDougall Diet” they may agonize to the group “…and it makes perfect sense. I just don’t know if I can let myself eat several potatoes at dinner, especially after eating oatmeal for breakfast and rice for lunch! Are you sure? I’m not going to bloat up like the Goodyear blimp??” I love the surge of support provided by long-time low-fat, whole food vegans who chime in with reassurance & encouragement, happily trumpeting all the weight they’ve lost & all the serious, chronic illnesses they’ve put into remission.

Fast forward any number of months.

The previously anxious, would-be McDougallers report back. A healthy new life is thriving! The low-fat, whole foods new-vegan is usually in a state of euphoria thanks to the wonderful increase in their energy, the astonishingly easy loss of copious quantities of excess weight, their glowing good health, and often, the reactions of their amazed/delighted doctors. Long-time McDougallers shower him/her with congratulations and share high-fives all ‘round.

It seems to me that in North American society, which has been larded (oops… I meant loaded) down in saturated fat & cholesterol for 50 years, our natural instincts have been corrupted. Most children come into the world loving fruit & cereal, but once their trusted care givers begin indoctrinating them with meat & dairy propaganda, their minds start ignoring their natural carbophilia (attraction to carbohydrates) and become vulnerable to carbophobia.

Thank goodness we have science-based carbo-friendly resources to help with the re-programing! In Low-carb Fraud, having already presented the case for diet high in complex carbs in his previous works Forks over Knives, The China Study and Whole Dr. Campbell deftly de-constructs the appeal & deceptions of low-carb diets.

In his book Carbophobia, Dr. Michael Greger draws together decades of research to decisively debunk the purported "science" behind the low-carb claims. How did so many intelligent people become so misled about carbs? According to Dr. Greger, “It is a case of major food industry players choosing to ignore all the current evidence-based dietary recommendations to protect their financial interests no matter what the human cost.”

If only these great doctor/authors were in charge of the world’s health care! For a complexity of reasons however, the battle over whether “to carb or not to carb” rages on in media & around dinner tables. I hope the time comes, sooner than later, when subsequent generations will look back on carbophobia with appropriate pity, much as we now look back at some of the more bizarre medical practices & beliefs of previous centuries.

Forks Over Knives - The Cookbook: Over 300 Recipes for Plant-Based Eating All Through the Year