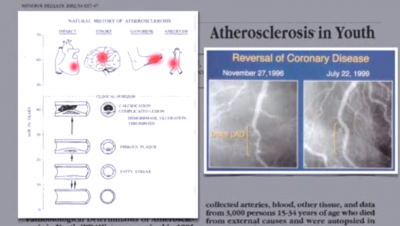 An article in the Journal of Atherosclerosis Research states that "Atherosclerosis begins in childhood, with the appearance of aortic fatty streaks" and that by age ten, 100% of children have these visible streaks, which is the first stage of heart disease. These atherosclerotic plaques will continue to form, resulting in serious coronary artery disease by age 30-40. The best way to prevent coronary heart disease is to adopt a whole-food, plant-based diet as soon as solid food is introduced in infancy. For more information, see Atherosclerosis Begins in Early Childhood.

Natural History of Aortic and Coronary Atherosclerotic Lesions in Youth