WHO Says Processed Meats Cause Cancer? 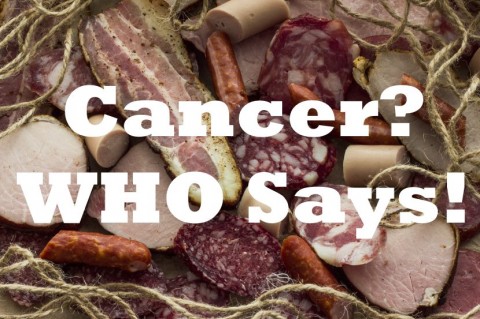 In the battle to maintain optimal health, foods that cause disease are our arch-enemy. No sane person would deliberately give his enemy access to a territory as important as his body. However, millions of people unwittingly open a path to disease through their dietary choices. Eating unhealthy foods, such as processed meats, is equivalent to giving the enemy—which in this case is cancer—a free pass to wreak havoc on our body.

Smoking, curing, and adding chemical preservatives increases the level of carcinogenic substances, such as heterocyclic amines, N-nitroso compounds, and polycyclic aromatic hydrocarbons (PAH) in processed meats. These cancer-promoting substances are capable of altering the genetic material of the cells and initiating transformation of healthy cells into cancerous cells and tumors. The scientific evidence supporting the cancer-promoting actions of processed meats is so strong that the World Health Organization (WHO) was prompted to labeled processed meats as "carcinogenic to humans" in 2015. Processed meats are Class 1 carcinogens, says WHO.  Class 1 carcinogens cause cancer in humans, according to IARC, the cancer research arm of the WHO.

The International Agency for Research on Cancer (IARC) is part of the World Health Organization (WHO). One of its major goals is to identify causes of cancer. The most widely used system for classifying carcinogens comes from the IARC. In the past 30 years, the IARC has evaluated the cancer-causing potential of more than 900 likely candidates, placing them into one of the following groups:

According to Cancer Research UK, red and processed meats are responsible for over 8,000 cases of cancer every year in the United Kingdom. Unfortunately, processed meats are one of the most consumed foods in the world today. Hello bacon, I'm talking to you!  This continues, despite the evidence that the cancer-promoting action of these meats is as strong as that of tobacco.

(1) Processed Meats Do Cause Cancer

(2) Processed Meat and Cancer—What You Need to Know

The Consumption of Red and Processed Meat and The Risk of Colorectal Cancer: A Case-Control Study among the Tunisian Population