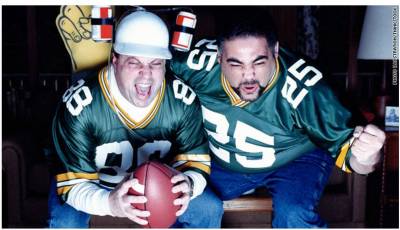 According to two studies published in 2008 and 2011, intense emotional strain, excitement, and distress experienced during viewing dramatic athletic games such as the Super Bowl can trigger a cardiovascular event. A study published in the 2008 New England Journal of Medicine revealed that heart attacks among German men spiked during matches involving the German team during the FIFA World Cup held in Germany in 2006.

A lead author of the study, Robert A. Kloner, M.D. reported "Fans develop an emotional connection to their team...and when their team loses, that's an emotional stress. There's a brain-heart connection, and it is important for people to be aware of that."

Emotional stress is only one risk factor associated with triggering cardiovascular events. "Consuming copious amounts of beer and fatty foods like buffalo wings -- practically a requirement at many Super Bowl parties -- can also trigger a potentially deadly heart attack." It should come as no surprise that Americans eat 1.23 billion chicken wings during Super Bowl weekend along with many other high-fat, rich foods. Click here to find out how heavily contaminated poultry products are with fecal bacteria, arsenic, and industrial toxins.

Furthermore, atherosclerosis and heart disease begins in childhood - as young as 3 years of age. Anyone who has ever eaten the standard American diet has heart disease to some degree; the diseased arteries just haven't progressed to the point of being detected yet. Although you may not have any symptoms, if you are in your 30's or 40's you most likely have advanced heart disease. Vessel damage and plaque buildup starts many years before it can be detected with current testing methods. By the time symptoms are felt, arteries may be blocked 75% or more. Many diagnostic tools aren't an accurate means of assessing your risk for heart disease because they don't detect artery blockage until the blockage is quite significant. (The heart treadmill test is one example.) Dr. Joel Fuhrman says that "Stress testing only identifies blockages that obstruct greater than eighty-five percent of the vessel lumen." Detailed information can be seen in the links below.

Atherosclerosis is a disease caused by years of eating the rich Western diet. Arteries coated in plaque are inflexible and cannot relax and dilate. Fatty plaque deposits accumulate and coat the inside of the blood vessel walls beginning in early childhood. These fatty cholesterol streaks can be seen in autopsies performed on children as young as 3 years of age. By age 10 nearly 100% of children have atherosclerotic plaque formations.

Special events and holidays come and go, yet the effects from eating poorly, even temporarily, have adverse consequences on our health. We may rationalize that "It's just a few meals, how harmful could they be?" Dr. Fuhrman emphasizes: "A SINGLE unhealthful meal inflicts damage on the cardiovascular system, can be extremely hazardous, and contributes to atherosclerotic plaque development. In susceptible individuals it may even provoke a cardiac event." Just like a single holiday meal can consist of thousands of calories, a Super Bowl weekend meal can as well. Celebratory meals generally include high-fat, high-calorie foods such as meat, cheese, sugars and oils. These highly-palatable foods can trigger addictive drives that launch many into an eating binge.

The majority of heart attacks (80-90%) occur when non-obstructive newly formed plaques rupture - causing a clot to form - blocking the flow of blood. These fragile plaques are found on the inside walls of our entire vascular system. Remarkably, we have between 60,000-100,000 miles of blood vessels! These vulnerable and unstable plaques are located throughout our entire vasculature and are impossible to see using diagnostic tools. Since everyone who has ever eaten the typical American diet has these plaques, everyone is at risk of suffering a heart attack. Because saturated animal fat turns our blood fatty and causes it to "sludge" - blood vessels constrict, causing a surge in blood pressure. On the other hand, the micronutrients and antioxidants in whole plant-foods dilate the arteries. Elevated blood pressure can rupture these small vulnerable plaques resulting in a blood clot which can either travel to the brain or to the heart. The oxygen content of the blood also decreases, which can trigger chest pain, and impaired brain function. Those who smoke, have diabetes and are obese are also at a higher risk of cardiovascular events.

Hospital emergency rooms are filled with patients that suffered a cardiovascular event following a rich, heavy meal. In fact, the majority of heart attacks occur during the holiday season between Thanksgiving and the New Year when rich foods are typically consumed. Make your Super Bowl weekend memorable without a trip to the hospital! Do everything you can to make sure your celebration meal won't be your last one! Celebrate by choosing health-supporting foods over disease-promoting ones. Remember, optimal health depends on the health of our entire vascular system! The good news is that diet-related heart disease can be prevented and even reversed using an aggressive plant-based diet and lifestyle approach. Educating ourselves is the first step towards reducing our risk for cardiovascular disease. For healthy Super Bowl party recipe ideas, click here.

(2) Everyone has Heart Disease