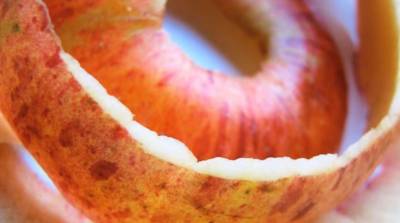 Many people are unsuspectingly throwing away a valuable resource in the fight against cancer. Apple peels have been found to be effective against the proliferation of cancer cells. Dr. Michael Greger's video, Apple Skin: Peeling Back Cancer, shows an amazing phenomenon. We see cancer cells disappearing when bathed in drops of apple peels blended with water.

The information in the video comes from a study published in the journal Nutrition and Cancer. Researchers placed two cell lines of prostate cancer and two cell lines of breast cancer in petri dishes and let them begin multiplying. Then, the scientists blended organic gala apples with water and over time repeatedly dripped a bit of the mixture on the cancer cells. By the end of the experiment, the cancer cells had nearly disappeared.

It is believed that apple peels turn on a protective gene that the cancer cells turn off. As Dr. Greger explains, "Maspin is a tumor suppressor gene that has been shown to have tumor suppressor, antiangiogenic and antimetastatic properties in both breast and prostate cancer cells. The tumor cells found a way to turn this gene off; and apple peels turned it back on." The researchers concluded that, "apple peels should not be discarded from the diet" because apple peel extract "possesses strong antiproliferative effects against cancer cells." Click here for more information.

Sometimes people ask if they have to buy organic in order to get the benefits of apples and other produce. Well, the first thing I usually tell people is that pesticides don't taste very good, and apples are heavily sprayed with pesticides. The second principle is that an "organic" label on disease-producing foods like meat, dairy, or oil is rather meaningless for anyone interested in optimal health. And third, organic produce is a great idea when it fits the budget. If organic fruits and vegetables are too expensive, we should purchase the freshest and best quality produce that our budget allows.

So, eat your apples--with the peel, but don't stop there. This study on apple peels and cancer cells highlights just one small aspect of the protective effect of a plant-based diet. I advise all my patients to eliminate animal products from their diets which includes meat, eggs and dairy, along with refined oils and processed foods. Instead, we should all be eating lots of vegetables, beans, fruit, and whole grains with a few nuts and seeds for variety, and absolutely no added oil. With this Starch-Smart® System, we can greatly lower our risk of cancer and nearly eliminate our risk of diabetes, arthritis, obesity, and cardiovascular disease.

What do 500 Calories Look Like in the Stomach?
South-of-the-Border Goodness!

Matt carter posted a comment in Sugar - How Sweet it is!
White Sugar is harmfull
about 3 days ago
Colleen Patricia Fedak posted a comment in Starch-Smartest
I see pepper is a NO-NO. I have read that to help the absorption of Turmeric that you should take ...
about 6 months ago
Isabelle Schweitzer posted a comment in Finding Relief for Inflammatory Bowel Disease (IBD)
I was wondering how Susie incorporated the Starchsmart method of eating and fueled her training. Di...
about 10 months ago
Sean Carney posted a comment in Curriculum Vitae of Linda Carney MD
I am Dr. Carney's husband and have no medical expertise. I just keep the web site running. Do you ne...
about 1 year ago