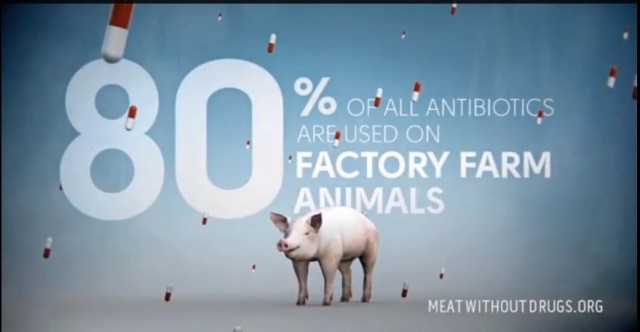 We are creating Antiobiotic Resistance at an Alarming Rate

Last year, Dr. Margaret Chan, the Director-General of the World Health Organization, warned about antibiotic use in factory farmed animals. She expressed her concern about our current miracle drugs not being effective in the future due to the rise of antibiotic resistance.

Dr. Chan points out, "A post-antibiotic era means, in effect, an end to modern medicine as we know it. Things as common as strep throat or a child's scratched knee could once again kill." Her proposal to avoid this tragedy is to "Restrict the use of antibiotics in food production to therapeutic purposes." This would restrict the routine use of antibiotics for all animals; using it only for those animals that are sick.

In the United States, millions of pounds of antibiotics are fed to factory farmed animals to promote growth or prevent disease. The FDA predicts that 80% of all antibiotics in the US are sold to the meat industry. Due to stressful, overcrowded, and unclean living conditions from the animals living in their own waste, the animals' immune system is impaired, creating heightened disease conditions and impeding growth. Antibiotic resistance occurs when organisms acquire a resistance to the use of antibiotics, making it difficult to treat disease.

What is not widely known is that antibiotic residue can be found in much of the meat supply, making its way onto everyone's dinner plate. No amount of cooking destroys the residue, and cooking may actually create more harmful components. Watch Dr. Michael Greger's video to learn more.

For more information regarding antibiotic residue in meat, click on the following:

Whole Grains Instead of Drugs?