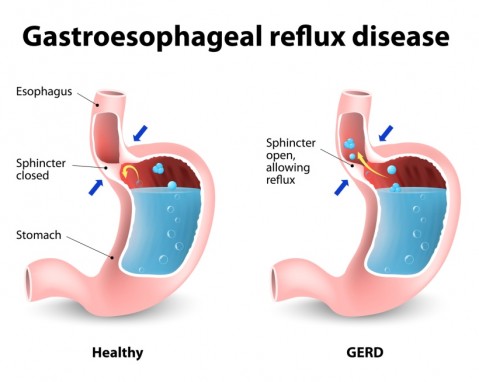 Gastroesophageal reflux disease (GERD) is a painful, chronic digestive disorder affecting millions of Americans every year. GERD occurs when the muscular valve between the esophagus and stomach is weakened or fails to close properly, which causes the contents in the stomach (including stomach acid) to travel up the esophagus. Constant irritation of the delicate lining of the esophagus can cause esophagitis, bleeding, ulcers, scarring, and even cancer. As a result, prescription and over-the-counter medications to relieve heartburn, indigestion, and acid reflux have been prescribed since the 1980s and are one of the most commonly used medications in the United States, generating billions of dollars in sales.

For many years, these drugs were considered to be relatively safe; however, due to the side effects and potential health risks associated with the more powerful proton pump inhibitors (PPIs), mounting evidence demonstrates that PPIs may not be as safe as once believed. Although widely prescribed in the United States, "an estimated 25 percent to 70 percent of these prescriptions may have no appropriate indication for use." Severe stomach pain and heartburn are reported in many patients as the drug leaves their system. Proton pump inhibitors work by inhibiting an enzyme which is necessary for acid secretion. Examples of proton pump inhibitors include: esomeprazole (Nexium), lansoprazole (Prevacid), omeprazole (Prilosec), pantoprazole (Protonix), rabeprazole (Aciphex), dexlansoprazole (Dexilant) and omeprazole/ sodium bicarbonate (Zegerid).

Reports linking PPIs like Prilosec, Prevacid, and Nexium to an increased risk of dementia/cognitive decline, chronic kidney disease, heart disease, and deficiencies of B12 and other vitamins have raised interest in the medical community. A few of the medical studies are listed below:

Dementia and Cognitive Decline - The findings of a study published in JAMA Neurology, "Association of Proton Pump Inhibitors With Risk of Dementia," concludes that "patients receiving regular PPI medication had a significantly increased incident of dementia compared with the patients not receiving PPI medication. PPIs seem to increase levels of a damaging protein that accumulates in the brains of dementia patients, known as beta-amyloid. The avoidance of PPI medication may prevent the development of dementia. This finding is supported by recent pharmacoepidemiological analyses on primary data and is in line with mouse models in which the use of PPIs increased the levels of β-amyloid in the brains of mice."

Chronic Kidney Disease - In the article, "Proton Pump Inhibitor Use and the Risk of Chronic Kidney Disease," published in JAMA Internal Medicine, a study revealed that the "risk of chronic kidney disease was 50% higher in those patients taking PPIs compared to nonusers." The risk of acute kidney injury was also greater than those not taking PPIs.

Malabsorption of Nutrients - Stomach acid helps the body absorb some nutrients, thus, reducing gastric acid secretion over a long period of time can affect the absorption of a number of nutrients such as B-12, iron, magnesium, and calcium as reported in the article "Association of Long-term Proton Pump Inhibitor Therapy with Bone Fractures and effects on Absorption of Calcium, Vitamin B12, Iron, and Magnesium" of Current Gastroenterology Reports. Widespread use of PPIs may increase the occurrence of bone and hip fractures by possibly decreasing calcium absorption.

B-12 Deficiency - Suppressing stomach acid decreases the absorption of B-12. The article, "Proton Pump Inhibitor and Histamine 2 Receptor Antagonist Use and Vitamin B-12 Deficiency," published in JAMA, revealed that those who took PPIs for at least two years had significantly higher risk of B-12 deficiency. Left untreated, a deficiency increases the risk of potential serious medical conditions such as dementia, anemia, and nerve damage which may be irreversible.

Medications which stop the production of stomach acid are powerful. These drugs may often be overprescribed and should not be used long-term. Other common side effects include: breast swelling in males (gynecomasty), loss of libido, impotence, mental confusion, and headache. If you suffer from GERD, you will see dramatic results after removing the acid-producing animal products from your diet and adopting a low-fat, high-fiber, starch-based, plant food diet. Many patients see improvements within weeks and frequently are able to discontinue their medications with their physician's approval when using this diet and lifestyle approach.

(2) Blogs featuring the work of Dr. John McDougall, Say Goodbye to Acid Reflux and How do You Spell Relief?