How Industries Keep You Coming Back for More

"Bet you can't eat just one!" Many of you may remember this popular slogan for a potato chip commercial from the 80's. What may surprise you is what measures the food industry takes to insure that you "can't eat just one." In the video clip below, Michael Moss,  Pulitzer Prize winning investigative reporter for the New York Times and author of Salt Sugar Fat - How the Food Giants Hooked Us, reveals the secrets the processed food industry uses to make us attracted to their products. His research spanned over four years, and included hundreds of interviews with the leading food manufacturers top executives.

The video exposes how the food industry is a highly competitive and secretive business. In fact, the competition to win over our taste buds is so great, these companies spend billions of dollars developing irresistible foods that have been created by food scientists using extremely sophisticated principles of chemistry, physics, mathematics, science and biology.

Processed foods today hardly resemble any food in its original form. The components have been taken apart, scientifically re-formulated, and put back together with the addition of three secret ingredients into a "food-like" product. The three secret ingredients are referred to as the "holy trinity" of processed foods and are designed in precise amounts to excite the 10,000 taste buds on the tongue. Because these engineered, highly-concentrated artificial ingredients are in proportions that nature never intended, they stimulate the reward centers of our brains - just like cocaine. The "holy trinity" is what makes processed and fast food so addictive, or as the industry likes to say "craveable." We naturally crave sugar "because this is our primary source of energy, and our love for salt insures adequate minerals for our body. Nothing is going to change our basic human physiology."

The first ingredient of the "holy trinity" is salt. Due to salt's powerful flavor, adding it to any unpalatable food can turn it into a pleasurable experience. Food industries commonly pulverize salt into a fine powder, so that it hits our taste buds even faster. This is referred to as a "flavor burst." Since salt is inexpensive, it's used as a preservative and can also mask any objectionable flavors. Meat for example, has an undesirable flavor until it has been infused with large amounts of salt, seasoned heavily, breaded with a batter made from flour, sugar and salt, or dipped in sauces high in salt. The metallic taste of added synthetic vitamins can also be hidden when salt is added.

Sugar is the second secret ingredient. Food scientists use cutting-edge technology to determine the exact amount of sugar that can be added to a certain point that keeps us coming back for more. The instant sugar hits our tongue it sends signals to the pleasure center of the brain. If too much sugar is added however, it creates a product that is sickening sweet. The point at which sugar can be added without being overly sweet is called the "bliss point."

The third ingredient the food industry lures the taste buds with is fat. Fat "can be added in almost limitless quantities—making it the most toxic of the three ingredients, especially when it comes to obesity and diabetes." Adding fat "enhances the mouth-feel" of a product; giving it a creamy texture that is exceptionally appealing. It also blends and produces a contrast of flavors and lubricates the mouth which makes people eat faster. When sugar is mixed with fat, the brain underestimates the amount of fat that is being eaten.

Taste Buds on the Tongue

Techniques Used by the Food Industry

As health concerns arise regarding the sugar, salt or fat content in processed food products, food industries respond by reducing the particular component that is being questioned; however in order to compensate for the flavor loss, they increase the other two components.

Similarly, food manufacturers find a way to market to those that are on special diets by advertising their products as being fat-free, low-sodium, or low-sugar. These catchphrases "attract new customers and lower 'the guilt factor,' which helps keep the most loyal patrons, called 'heavy users,' buying their products." Unhealthy processed foods can also be promoted as being an excellent source of fiber, whole grain, or natural. These claims can be very misleading. Whole grain children's cereals for example are far from healthy if they are heavily processed and contain sugars and many other artificial ingredients. See Jeff Novick's label reading rules here. 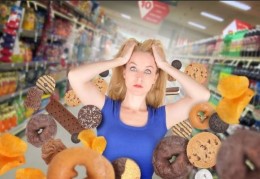 Food scientists know exactly what triggers the brain to keep their customers coming back for more. Using highly sophisticated procedures, they have manipulated and produced artificial foods that stimulate the tongue's taste receptors and corresponding chemical reactions in the brain. Like the tobacco industry, today's food manufacturers have discovered how to separate foods and put them back together again with super-saturated concentrations of sugar, fat and salt so that they produce effects similar to that seen in drug addiction. Highly processed, highly-palatable foods stimulate the release of dopamine (the pleasure neurotransmitter) creating pleasurable thoughts and feeling towards those particular stimuli. This can be seen on brain scan images and is used by the food industry to record how the brain reacts neurologically to certain foods. The constant release of dopamine causes us to choose the artificial highly-concentrated flavors over the natural flavors found in whole, unprocessed foods. Foods that are lower in fat and calories do not create dopamine surges and addictions. It would be hard to find someone that's addicted to broccoli or cucumbers! Those that consume the typical American diet dislike whole natural foods for this reason. Because their dopamine reward system has been blunted, these foods do not satisfy their cravings/addictions and the food tastes bland and unattractive. Meat and dairy, and especially cheese are also addictive, due to their high fat and salt content. Food addictions begin when we crave the pleasurable feelings associated with the foods we eat. Click here for more information.

The processed food industry "spends billions of dollars on developing and marketing highly irresistible and convenient foods to customers" resulting in serious health consequences. Processed foods are ubiquitous, inexpensive, highly-palatable, super-sized, and calorie-rich; all methodically designed to shape the blueprint for America's eating habits. Indeed, their efforts to dominate the American diet are working; nearly half of the daily calories consumed by Americans come from highly processed foods. Removing or limiting the amount of salt, sugar and fat in processed foods would put the industry out of business. They rely on them not only to make their food attractive, but also to ensure that their customers won't be able to "eat just one."

(1) Who's Influencing Your Children?

(6) Which Foods are the Most Popular?

(7) Losing Weight Without Losing Your Mind

(9) But I Could Never Give up Meat or Dairy!

Who has Heart Disease? Everyone?
Fatty Foods Dull our Dopamine Reward System

Matt carter posted a comment in Sugar - How Sweet it is!
White Sugar is harmfull
about 5 days ago
Colleen Patricia Fedak posted a comment in Starch-Smartest
I see pepper is a NO-NO. I have read that to help the absorption of Turmeric that you should take ...
about 6 months ago
Isabelle Schweitzer posted a comment in Finding Relief for Inflammatory Bowel Disease (IBD)
I was wondering how Susie incorporated the Starchsmart method of eating and fueled her training. Di...
about 10 months ago
Sean Carney posted a comment in Curriculum Vitae of Linda Carney MD
I am Dr. Carney's husband and have no medical expertise. I just keep the web site running. Do you ne...
about 1 year ago