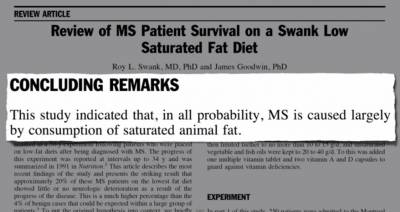 Multiple sclerosis is a degenerative autoimmune inflammatory disease of the central nervous system where our body attacks our nerves. The most popular drugs used to treat multiple sclerosis cost over $55,000 a year, however it was found that these drugs have not been proven to prevent or delay long term disability and are largely ineffective. Some drugs have been documented to cause irreversible heart damage in one out of every eight patients. Similarly, these drugs have also been shown to promote treatment-related acute leukemia. Dr. John McDougall says that "Within 10 years of diagnosis, half of the victims of MS are wheel-chair bound, bed-ridden, or dead – unless they are fortunate enough to change their diet. With a healthy diet the risk of getting worse over the next 35 years is less than 5%."

This discovery compelled him to put his hypothesis to the test where he restricted his patient's consumption of animal fat. The patients adhered to a low-fat diet comprised of less than 20 grams of fat per day. Surprisingly, 144 patients had no trouble following the diet, and were followed for 34 years. Dr. Swank's study showed that by restricting saturated fat intake to lower than 20 grams a day, he was able to stop the progression of multiple sclerosis in 95% of his patients. These patients remained only mildly disabled, and exhibited no progression of disease 34 years later. The study showed, "Significantly less deterioration and much lower death rates than did those who consumed more fat."

Remarkably, researchers were able to contact 15 patients that followed the prescribed diet for 50 years. Thirteen out of 15 had normal mental capacity, were ambulatory, and could care for themselves. They were in good spirits, and displayed an unusual youthful appearance and behavior. The 50 year study indicated that, "In all probability, MS is caused largely by consumption of saturated animal fat." This is due in part, to the slugging of the blood that takes place following a meal containing saturated animal fat and cholesterol. A single high-fat meal restricts normal blood flow and oxygenation of our tissues for many hours following the meal. Research has shown that when cholesterol and saturated animal fats are removed from the diet, an immediate and significant favorable response can be seen in vessel dilation.

Inflammation caused by the consumption of animal products is another factor that is thought to contribute to this disease. Dr. Greger concludes that, "Patients who follow a low-fat diet consisting of no more than 10-15 grams of saturated fat can expect to survive and thrive to a ripe old age." He goes on to say that cutting out saturated fats from our diets may be even a better idea, since heart disease is the leading cause of death in America.

Based on the pioneering research done by Dr. Roy Swank, "The results of his 34-year study published in The Lancet in 1990, remain the most effective treatment of multiple sclerosis ever reported in the peer review literature. In patients with early stage MS, 95% were without progression of their disease 34 years after adopting his low saturated fat dietary program. Even patients with initially advanced disease showed significant benefit. To date, no medication or invasive procedure has ever come close to demonstrating such success."

Dr. Roy Swank wrote over 170 scientific papers as well as several books on diet and multiple sclerosis including "The Swank MS Diet Book." Dr. Swank passed away at the age of 99, but his ground breaking research will not be lost. Thankfully, Dr. John McDougall has been following close behind in Dr. Swank's footsteps and is conducting his own research regarding the treatment of multiple sclerosis using a low-fat, whole-food, starch-based, plant-centered diet. We are looking forward to seeing the results of this study which should be published soon.

Why Did You Quit Eating Meat?
Male Fertility and Diet