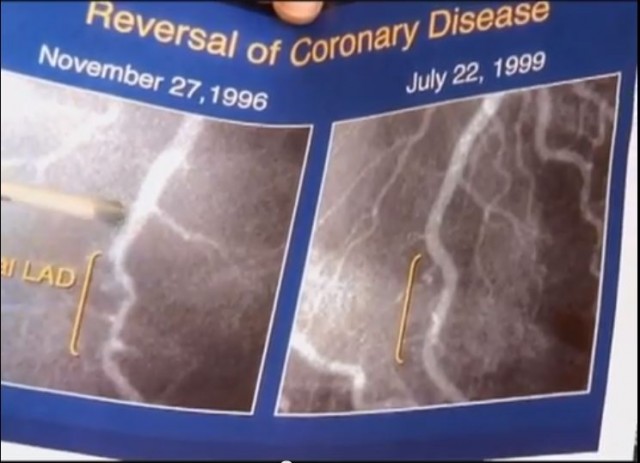 If you or someone you love has heart disease, please watch and share this video. Heart disease is the leading cause of death in America. Approximately 1.5 million people will suffer a heart attack this year. From these, approximately 1 million deaths will occur, resulting in one death every 30 seconds.

Tragically, the majority of these heart disease cases could have been prevented had the patients known about the powerful and protective effects of a whole-food, plant-based diet. Heart disease is very rare in countries that consume large quantities of whole plant foods and minimal amounts of saturated animal fats. Studies show that the rate of heart disease in a population is directly proportional to the percent of animal fat consumed in the diet of that population.

Dr. Caldwell Esselstyn insists that the answer to ending cardiovascular disease does not come from a pill, stents, or bypass surgery. He explains that we need to eliminate the cause of the disease instead of just treating the symptoms.

The results from using an aggressive nutritional approach for reversing heart disease are impressive. Dr. Esselstyn demonstrates this fact by showing a "before and after" angiogram photo of one of his heart patients. The patient's coronary LAD artery had narrowed considerably, due to the presence of plaque buildup. The dramatic reversal of plaque can be seen in the "after" photo along with the widening of the LAD artery.

Reversal of heart disease starts with the first healthy plant-based meal. It must be remembered though, that the benefits received by using a nutritional approach are directly proportional to the changes that are made. Making only small changes, while continuing to eat injurious foods will not result in any significant reversal. Heart disease is reversed only when an aggressive approach is used and followed correctly. Your first plant-based meal will begin the process of calming spasms of the blood vessels, dilating the arteries, removing the plaque and cholesterol, and stopping the sludging of blood, all of which improve oxygen and blood flow.

The most compelling evidence regarding diet and reversing coronary vascular disease was documented during World War II. Dr. Esselstyn shows how the incidence of the disease plummeted from 1939-1945 when the Germans removed all animal livestock from Norwegian countries. He explains this in detail, stating, "Norway was one of several western European nations occupied by Nazi Germany during the conflict between 1939 through 1945. The Germans removed all animal livestock from these occupied countries. The native population subsisted on whole grains, legumes, vegetables and fruit. Almost immediately death from heart attacks and strokes in Norway plummeted. With the cessation of hostilities in 1945 animal products became available as well as an immediate return to the prewar levels of deaths from these illnesses."

The evidence is exceptionally convincing. Adopting a whole-food, plant-based diet has been shown to prevent coronary vascular disease, as well as reverse it. At first, an aggressive dietary approach may feel overwhelming, requiring much discipline and dedication, yet after a few weeks of adjusting, it will become much easier and surprisingly very easy to follow.