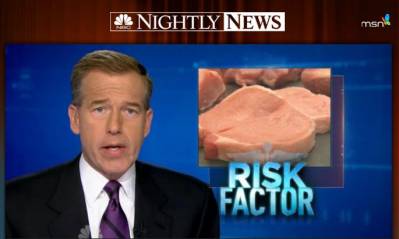 Research has narrowed down a compound in red meat that could be an important link in the promotion of coronary artery disease. This is in addition to the well known fact that saturated animal fats significantly increase the risk factors associated with developing heart disease. The compound that was discovered in red meat is called carnitine. During digestion, bacteria in the intestines break down carnitine into a substance called TMAO.

TMAO is a substance that is responsible for increasing the build up of atherosclerotic plaque. This evidence validates the large body of scientific evidence linking meat consumption to heart disease. Check out this 2013 NBC Nightly News Report.

All of this said, some people took this study the wrong way and tried to infer that saturated fat and cholesterol were now no longer cuprits to be worried about. The Pritikin Longevity Center wrote a good article entitled What is Carnitine? in which the need for more research is called for.

While red meat is the largest source of carnitine, it is not the only source, as Dr. Greger mentions in his video above. Other sources of carnetine are milk products, fish, and chicken. And, there is even a small amount in some plant foods. But, by far red meat is the largest culprit of disease producing carnitine. In fact, the carnetine in plant foods has not been found to be harmful in any way.

Since this study was done, others have followed. The list of diseases caused by TMAO is increasing.

(2) Why Eating Less Red Meat May Help Your Heart