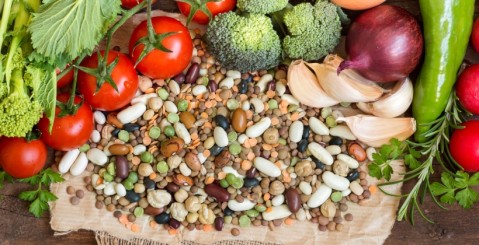 The Biblical figure Daniel is possibly best known for spending time in a den of lions, but these days he's almost as well known for his dinner plate. Many people choose to emulate Daniel's abstemious eating style for a short duration for either health or spiritual purposes. Known as a "Daniel Fast," the eating plan is based on the first twenty verses of the Biblical book of Daniel when Daniel and other young noblemen are newly captured by an invading king who wants to train them for service in his kingdom. The king assigns the captives a portion of food and wine from the king's own table. However, the rich diet of the foreign king is not religiously acceptable to Daniel and three of his friends, so Daniel requests "pulse and water." (The word pulse is often translated as "vegetables," and simply means food grown from seed.) After ten days on this simple diet, Daniel and his friends are found to be healthier and better nourished than the other young men who had been eating the king's food. Is this just an old story or can Daniel's diet stand up to scrutiny by modern science?

A study investigated the effects of a 21-day Daniel Fast on 43 men and women. Fast participants could eat no meat, eggs, fish, or dairy products. They also had to eliminate processed foods, white flour products, preservatives, additives, sweeteners, flavorings, caffeine, and alcohol. Outside of these restrictions, the participants were allowed to eat freely of legumes, vegetables, grains, fruits, nuts, and seeds. The participants reported that they enjoyed being able to eat such a wide variety of food without portion control but that they did experience fatigue when withdrawing from the stimulation of caffeine. Planning and preparing the meals to fit the guidelines of the fast was challenging for the participants, but they "commented repeatedly" that the fast forced them to review food labels and thus significantly increased their knowledge and awareness of the calorie content and nutritional composition of foods, as well as the presence of additives and preservatives in foods. Most fast participants reported that they would "continue implementing many components of the plan into their previous diets."

The metabolic and cardiovascular health of the participants showed significant improvement. The researchers found that a 21-day Daniel Fast:

Prior to the fast, six participants reported that they were vegetarians (including dairy and eggs, but no meat in their diet). Researchers evaluated these six women and found that after 21 days on the Daniel Fast, there was a dramatic reduction in their total and LDL cholesterol and improvement in other markers as well. "Clearly, the exclusion of meat from the diet (as is the case for vegetarians) is not the only dietary factor involved in raising circulating cholesterol and other risk factors for cardiovascular and metabolic disease," observed the researchers. Things like eating moderate and high fat dairy products, consuming processed and packaged foods containing trans fats, plus eating foods rich in simple carbohydrates with various additives and preservatives can all harm cardiovascular and metabolic health.

Did the Daniel Fast participants lose weight? Interestingly, although the researchers did note some "positive changes in body weight," the weight change was not significant. This was attributed to the fact that most of the fast participants were in "very good physical condition" prior to the fast and had "little room for improvement." In reviewing the diet journals of the participants, researchers noticed that the caloric intake of the participants dropped about 20% from their intake prior to the fast. Although the participants were eating the same volume of food, the Daniel Fast foods were more nutrient dense but less energy (calorie) dense. The researchers state that "the intake of natural, high fiber, low glycemic carbohydrate foods enhances satiety and consequently reduces kilocalorie intake," and that if obese subjects had been included, researchers would have expected to see more changes in body composition. While many modern people would want to lose weight on a Daniel Fast, the original participants were young men in the prime of life who had no desire to shed pounds. A simple diet didn't make them weak and skinny, but rather -- just as this study demonstrated for modern people who were in good physical condition -- a whole-food, plant-based diet made them even stronger and healthier.

In this study, ancient wisdom held up to modern scrutiny. Scientists replicated the favorable effects that Daniel experienced when he powered his life with plants. Lab test showed that, like Daniel, the modern fast participants were "healthier and better nourished" after the fast than they were before. When we avoid damaging animal-based foods and processed foods, and when we replace them with beans, lentils, leafy greens, potatoes, whole grains, colorful fruits and vegetables, and a few nuts and seeds, we too can be "healthier and better nourished" like Daniel.

(1) Another scientific study on a Daniel Fast

(2) Unscrambling the Truth About Eggs

Sodium Intake and Risk of Hypertension: A Systematic Review and Dose-Response Meta-analysis of Observational Cohort Studies

Consumption of Ultra-Processed Food and Blood Pressure in Korean Adults