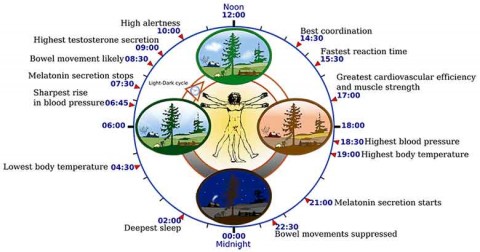 "It's not nice to fool Mother Nature," said the Chiffon margarine commercial of the 1970s. According to Chiffon, it was possible to "fool Mother Nature," but if we did it — said the commercial — we would suffer the consequences. Today, we know that margarine is definitely not the health food we all thought it was back then. I tell my patients to stay away from all extracted oils including margarine. But the premise of that classic Chiffon commercial is interesting. Is it possible to "fool Mother Nature?" In essence, that's one of the many areas investigators are exploring as they try to unravel the riddle of rising obesity.

There is no question that obesity is increasing, but why do some people struggle more than others? Are our bodies just different? Some people swear they are natural "night owls." Others claim they are "early birds." Do we each have our own internal clock? If we follow that clock, will we be healthier? Researchers are looking into our body's natural clock, our circadian rhythms, to see if "Mother Nature" has wisdom about our weight. Let's look at what the science says regarding the timing of meals.

We thought some of you, of a certain age, might enjoy a stroll down memory lane:

Research is indicating that not only is it "not nice" to fool Mother Nature, it's simply not possible. Our body functions best if we follow its natural rhythms rather than letting modern lifestyles, family habits, or life-long beliefs about our "personal natural rhythm" dictate our behavior. Despite our body type, our family history, or our natural tendencies, we can choose optimal health.

In a study of 420 overweight or obese patients on a 20-week weight-loss diet, researchers looked at the timing of their largest meal of the day — their "lunch" — to test if when participants ingested the majority of their calories made a difference in weight loss. The group was divided into "early" lunch eaters (those who ate before 3:00 p.m.) and "late" lunch eaters (those who ate after 3:00 p.m.). Forty percent of the day's calories were eaten at lunchtime, and there was no significant difference in the caloric intake of lunch and supper between the two groups. However, late eaters did show lower calorie intake at breakfast and skipped breakfast more often. Supper times of participants were influenced by the timing of lunch, but the hour for breakfast did not appear to be related to meal times from the evening before. In addition to timing and energy content of meals, researchers considered other factors which might influence the results:

• typical eating habits when not participating in the study
• total energy expenditure
• whether the individual identified as a "morning person," an "evening person," or "neutral" (somewhere in between)
• how long an individual usually slept
• levels of appetite hormones (leptin and ghrelin)
• genes associated with obesity or certain metabolic syndromes

When the data was analyzed:

No significant differences were found in age, gender distribution, obesity-related variables and metabolic syndrome characteristics between the early and late lunch eaters except for HOMA, an index of insulin resistance, which was significantly higher in the late eaters. Habitual energy intake, total energy expenditure and physical activity were also similar between the late and early eaters. Moreover, no significant differences were found between the two groups studied in appetite hormones and sleep duration. Nevertheless, late eaters were more evening types ... than early eaters .... Regarding the genetic background ... the minor allele (G) [a less frequent form of a gene], that has been previously associated with obesity was significantly more frequent among late eaters than in early eaters. Furthermore, the minor allele carriers [G] [who carry the form of the gene associated with obesity] had lunch significantly later than major allele carriers [who do not carry the alternate form of the gene].... Surprisingly, total daily energy intake was similar between both groups. Moreover, no significant differences were found for dietary composition during the weight loss treatment.

In their discussion of the results, the study authors concluded that there a relationship between the timing of food intake and the effectiveness of weight loss. Participants who ate the bulk of the day's calories before 3:00 in the afternoon lost more weight. All participants were on a similar weight-loss diet; timing of meals was the major difference in whether or not the individual lost weight. Caloric intake, macronutrient distribution, and energy expenditure did not seem to affect weight loss. However, the timing of the evening meal was associated with some of the measured factors. The authors noted that late eating was associated with people who carried a less frequent form of a particular gene which scientists have determined to be associated with obesity. Further, being an "evening person," the amount of protein eaten at lunch, and insulin sensitivity were all associated with late eating.

Looking at those associations, we might be tempted to say, "See, I told you it was genetic. Some people are just 'programmed' to be heavy." But after carefully analyzing the data, the authors of this study negate that conclusion in very definite terms:

In theory, differences in sleep duration, [a natural propensity to being a 'morning' or 'evening' person] and genetic variants could have explained the observed differences in weight loss between late and early eaters. Nevertheless, none of these factors were independently associated with weight loss. Although we do not discard the possibility that these effects may be additive.... The timing of the main meal by itself seems to be the most determinant factor in weight loss effectiveness, and therefore eating at the right time may be a relevant factor to consider in weight loss therapies.

I cannot argue that it may be harder for some people than for others to ensure they are eating the bulk of their calories before three in the afternoon. Each of us faces an uphill struggle in some aspect of our life. Genetic predispositions to diabetes, high cholesterol, hypertension, or obesity are all tough to tackle. However, the fact that something is hard doesn't make the goal unattainable. Some children learn to read easily. Others struggle to master the skill. As adults, what do we do in these situations? We are more patient with the struggling child. We give them extra time and extra instruction. We encourage the struggling child to keep going despite the obstacles because we know that literacy is a worthwhile goal. Not all children will grow up to pursue a career heavily reliant on the written word, but all children are capable of basic literacy. It's the same for optimal health. Achieving a healthy weight is harder for some of us than for others. We may need extra encouragement in our struggle. Not all of us will have a "twiggy" body shape in the end, but we can all optimize our health regardless of our body type or genetics.

This study indicates that our body responds to circadian rhythms whether or not we're fully aware of them. I've seen in my general medical practice that patients who work with "Mother Nature" by eating a low fat, whole-foods plant-based diet free from added oil, taking in the majority of their calories early in the day, finishing a light supper before six in the evening, exercising, and being asleep by two hours before midnight, generally experience greater success in reaching optimal health. These steps align with our basic design and help us fit into our natural, circadian rhythms. "Mother Nature" does seem to know best, and if we attempt to "fool" her, there are consequences to pay. Obesity is one of them.