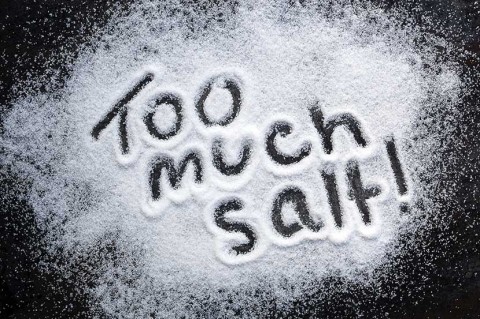 "A large number of studies have been conducted, all of which support the concept that salt intake is the major factor increasing [blood pressure] in the population. The diversity and strength of the evidence is much greater than other lifestyle factors, for example, overweight, low consumption of fruit and vegetables and lack of physical exercise," says a comprehensive review published in the "Journal of Human Hypertension." The article goes on to report that elevated blood pressure is the strongest contributing factor to cardiovascular disease, which in turn is the leading cause of death world wide. Where is the salt in our diet coming from? The American Heart Association has identified six popular foods which contribute a significant amount of salt to the American diet. 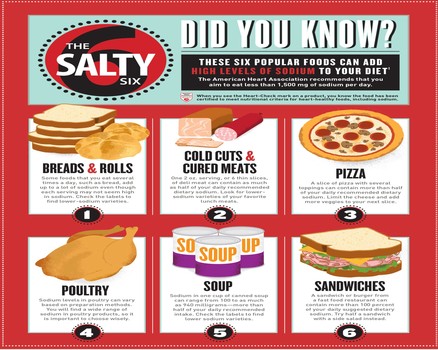 According to the American Heart Association (AHA), only six percent of American sodium intake comes from salt added at the table or during home cooking. The majority of our salt intake comes from foods made outside of our own kitchens. The review in the "Journal of Human Hypertension" reports that many nations have successfully launched campaigns to lower national sodium consumption, and among those, the United Kingdom is a recognized leader. The UK asked industry to lower sodium content in manufactured foods, like bread, by ten to 20 percent, an amount low enough to be imperceptible to the human palate. After allowing the public to adjust to the lower levels for one to two years, another ten to twenty percent reduction was made. With gradual, voluntary reductions such as these in 80 different categories of manufactured foods combined with a public awareness campaign and efforts to encourage restaurants to reduce sodium in their offerings, the public has lowered its salt consumption without noticeably sacrificing taste or enjoyment of their food.

In terms of a national thrust, the United States has not been as proactive in the initiative to lower sodium intake among the populace. But as individuals and families, we can easily reduce our sodium intake by choosing a whole-food, plant-based diet. Looking at the Salty Six chart, we can see that by simply avoiding meat and animal products, we eliminate at least half the foods with high levels of heart-damaging sodium. Cooking at home would further eliminate sources of added sodium, especially if we commit to salting our food at the table rather than during the cooking process. Soups are one of the easiest foods to make at home, and recipes from sites like StraightUpFood.com can help us get started.

While reducing our sodium intake in bread products might seem a little more challenging, there are options for WFPB eaters trying to protect their cardiovascular health. Food for Life makes bread, tortillas, and other low-sodium baked goods; their products are usually found in the freezer section of the grocery store. Some who adopt the WFPB diet find they naturally begin relying less heavily on bread products because potatoes, sweet potatoes, and whole grains such as brown rice or quinoa become a larger part of their diet. Others enjoy the process of learning to bake their own 100% whole grain bread or find that a bread machine is a worthwhile investment; salt is an ingredient added to bread for flavor, and can be reduced without affecting quality. When we purchase bread, looking for 100% whole grain products with a calorie to salt ratio of 1:1 is ideal.

As we become more aware of the obvious and not-so-obvious sources of heart-damaging sodium in our diet, we can be inspired by the success of the United Kingdom which reduced the sodium intake of the population by 15% over seven years. Committed individuals can easily begin enjoying lower sodium foods in as little as three months. Gradual reductions in our salt intake will allow our taste buds (as well as our arteries) to heal. All plant foods naturally contain a small amount of sodium. Over time, our taste buds will become sensitive to the subtle flavors in whole plant foods, and we will begin to appreciate the tastes of vegetables, legumes, fruits, and whole grains as we never have before.

How much do you know about salt in the American diet?  Take this quiz from the American Heart Association and find out: Test Your Knowledge of Sodium.

Is GERD a Symptom of a Hiatal Hernia?
Fiber Stops the Merry-Go-Round of Recirculation