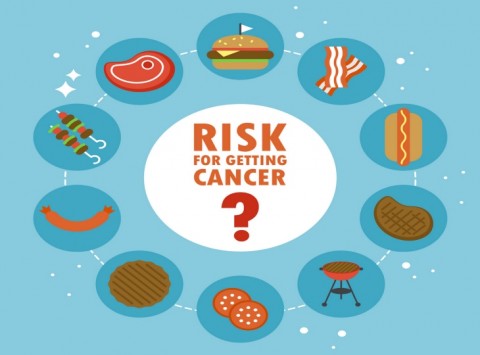 Colorectal cancer is a major public health burden, with 1.4 million new cases diagnosed worldwide in 2012 and over 130,000 new persons expected to develop the disease in 2017 in the United States. Many factors have been attributed as possible causes of colorectal cancer, including poor dietary choices and chemical carcinogens. Generous intake of processed meat products have been identified as part of the dietary factors that promote the development and growth of cancerous cells in the large intestine.

Processed meats refer to red meat that has been transformed through processes, such as curing, salting, fermenting, and smoking, to improve the quality of its flavor or enhance its preservation. Some common examples of processed meat products include hot-dogs, bacon, ham, sausage, and deli meats. The International Agency for Research on Cancer (IARC), a division of the World Health Organization (WHO) recently classified processed meats as a Group 1 carcinogen. The significance of this classification is that processed meat products are grouped together in the same category as alcohol and smoking as one of the definite causes of different forms of cancer, including colorectal cancer.

Colorectal cancer is a disease that directly results from the serial accumulations of genetic alterations in the epithelial cells lining the colon and rectum. These genetic mutations are stimulated by a potent group of human carcinogens, including N-nitroso-compounds (NOCs). Humans can be exposed to high levels of NOCs by exogenous route through regular consumption of processed meats, such as grilled bacon and smoked meat, and endogenously via the conversion of heme and nitrite found in high amounts in processed meats in the gut. NOCs are alkylating agents that react with DNA and disrupt the DNA synthesis mechanism, resulting in abnormal DNA replication. The distortion of the DNA synthesis mechanism by NOCs accelerates the development and growth of cancerous cells and tumors in the colon and rectum.

Munching a delicious piece of hot-dog, ham, bacon, sausage, or deli meat might trigger a pleasant sensation in your taste buds, but it might also stimulate the growth of cancerous cells and tumors in your colon and rectum. Of course, you do not want to be among the millions of people suffering from colorectal cancer worldwide. Processed meat products should have no place in your diet if you want to live out your full life expectancy in good health devoid of colorectal cancer. Every bite of a processed meat product you take may put you at greater risk of developing this deadly cancer.

(3) ACS Guidelines on Nutrition and Physical Activity for Cancer Prevention

(4) Processed meat and cancer – what you need to know

(6) Processed meat and colorectal cancer: a review of epidemiologic and experimental evidence.

Intake of processed meat, but not sodium, is associated with risk of colorectal cancer: Evidence from a large prospective cohort and two-sample Mendelian randomization

The Consumption of Red and Processed Meat and The Risk of Colorectal Cancer: A Case-Control Study among the Tunisian Population