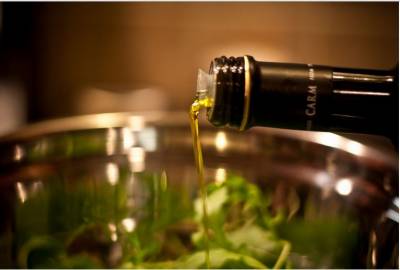 Looking back at the data collected from the 1950s-1960s, we see that the Mediterranean Diet was based largely on whole plant foods, with the emphasis on fruits, vegetables, nuts, seeds, beans, legumes, whole grains and breads. Olive oil, fish and wine were an additional component to this diet. Highly processed foods and unhealthy hydrogenated and saturated fats such as butter and coconut oil were avoided as well as salt and sweets. Eggs, meat, and dairy were eaten in limited amounts. Exercise was also an important constituent of the Mediterranean diet. Americans looking for a "heart healthy" diet believe they are consuming the Mediterraniean diet by pouring olive oil on their food and adding a glass of wine to their meals.

Dr. Michael Klaper states in his article, "Compared to a Standard American Diet that pours a lethal stream of heavy fats, hydrogenated oils, refined sugars, and artery-injuring proteins through one's blood stream, the Mediterranean Diet, which relies heavily on vegetables, fruits, pasta and fish, is certainly an improvement. It's healthier because it's a mostly vegetarian diet, largely free of red meat and dairy products."

Although the Mediterranean Diet has many healthy attributes, Dr. Klaper does have concerns about eating fish, due to it being highly contaminated with mercury and pesticides. Furthermore, "Harvesting fish" he says, often results in "widespread destruction of our ocean ecology." He goes on to say, "Pouring olive oil on your food does NOT make your meal heart healthy. Olive oil makes your arteries stiffer and can contribute to the formation of artery-clogging atherosclerotic plaques and, thus, damage the health of your arteries." Due to its calorie density, at 120 calories per tablespoon, olive oil also promotes weight gain, which creates the perfect environment for the onset of obesity related illnesses such as diabetes, cancer, and heart disease.

More recent studies done on population groups living in the Mediterranean show that they have not only increased their cholesterol, saturated and trans-fat intake, they have also decreased their consumption of fiber which means they are not consuming as much whole plant food.

Most of the participants from Spain that were recently studied, were overweight, diabetic, and had a high risk for coronary artery disease. According to the newest data, the once "heart healthy" Mediterranean Diet has been significantly influenced by Western culture, resulting in a dramatic increase in diet related diseases much like the U.S.

Dr. Klaper concludes his article by emphatically stating that the "Mediterranean Diet is healthy IN SPITE of olive oil, not because of it." He whole-heartedly endorses a whole-food, nutrient-dense, plant-based lifestyle that avoids the use of olive oil in both cooking and in salad dressings. Read the article, "Mediterranean Diet: Healthy IN SPITE OF Olive Oil" by Michael Klaper MD, here.

For more information regarding the use of olive oil, see:

(2) Endothelial Cells to the Rescue!

(6) How Industries Keep You Coming Back for More

(8) Learn how to saute` and bake without using oil

Food consumption and the incidence of type II diabetes mellitus.

How to Caramelize and Sauté Without Using Oil