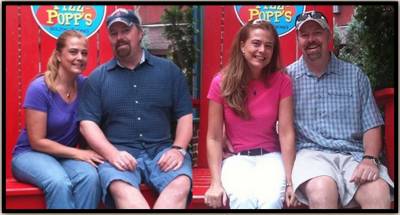 Kelly Binkoski was diagnosed with invasive ductal carcinoma in January of 2012. Her surgeon scheduled her for surgery with an aggressive chemo and radiation plan following surgery. She and her husband inadvertently watched Forks Over Knives two days before her surgery, and their lives were forever changed. The documentary introduced her to the work of Dr. John McDougall and his breast cancer patient, Ruth Heidrich.

Kelly's husband emailed Dr. McDougall and they continued to correspond. Dr. McDougall sent her medical articles and scientific studies so that they could make an informed decision regarding her treatment. Both of Kelly's doctors told her that they didn't know what causes cancer, and that, "This is the time for Kelly to eat whatever she wants." She was also told to see a cardiologist for an echo cardiogram, to make sure that her heart was "strong enough to handle the heart problems that would likely result from the chemo drugs."

Kelly became Dr. McDougall's patient following the surgery. She has lost 30 pounds, her cholesterol and glucose levels have dropped, and she says she feels "stronger, healthier, and more energetic." Kelly is cancer free, 18 months after switching her diet, and has no trouble keeping up with being a kindergarten teacher. Her husband shares her excitement as well, and has also lost 30 pounds. She says he "no longer requires the daily antacids, allergy medication, or the Naproxen he used to take for joint pain."