Has Eating a Low-Fat, High-Carb Diet Failed us? 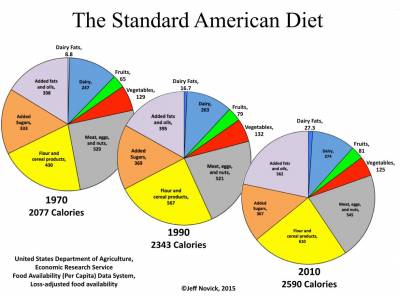 Low-carb, high-protein diets have become extremely popular and are especially appealing to dieters, since they offer a quick (yet temporary) reduction in weight. Advocates of low-carb diets speculate that 30-40 years of governmental low-fat, high-carb recommendations have failed Americans terribly, thereby fueling an epidemic of chronic disease and obesity. As a result, instead of reducing or limiting portions of animal protein and saturated fats, they strongly urge their followers to embrace these components as the primary source of calories and severely limit or exclude any form of carbohydrates - including fruit, starchy vegetables, whole grains and legumes. Since whole grains, starchy vegetables, fruit and legumes are an integral part of the plant-centered diet that we recommend, it's hard for diet-conscious individuals to sort through all of the conflicting reports and propaganda. Thankfully, Jeff Novick has gathered and interpreted data supplied by the USDA which reveals the real reason behind America's soaring rates of chronic disease and obesity. This data is presented in the above 7-minute video clip.

Authors of low-carb diet books claim that Americans have cut their fat consumption and replaced it with foods high in carbohydrates, yet they don't define which type of carbs - whole or refined? Indeed, the nutritional profile differs greatly between the two. Whole carbs support optimal health and well-being, while refined carbs do not. (Roughly 90% of our grain consumption comes from refined grains, not whole grains.) 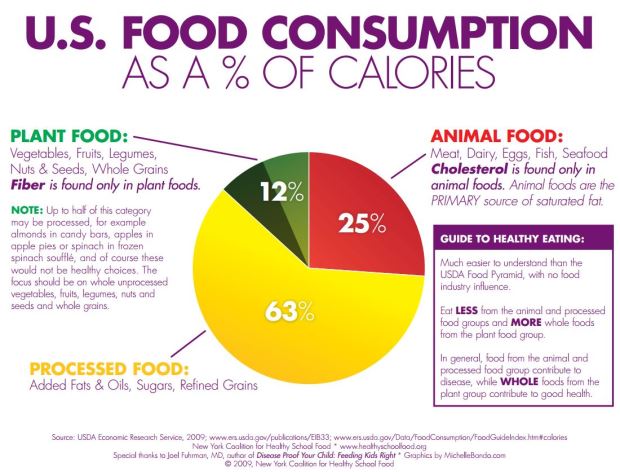 Comparing the dietary trends from 1970 to 2000, Americans consumed 500 additional calories per day in 2000 than they did in 1970. Where were the extra calories coming from? Animal protein, refined flour/grains, fat, processed foods, refined oils and sugar - with the majority coming from high-fat foods (including refined oils) and REFINED carbohydrates such as REFINED flours. (224 calories from fats and refined oils and 190 from refined flours.)

Considering that nearly 50% of calories consumed in the typical American diet come from meat, dairy, eggs, and added fats, Americans are not following a "low-fat" diet like the low-carb authors claim, but instead are following a "high-fat" diet. A low-fat diet is roughly 10-12% calories from fat, whereas a high-fat diet is 35-40% or more calories from fat. Furthermore, the United States ranks one of the highest consumers of meat products. Studies show that the rate of heart disease and cancer are the greatest in the countries that consume the most animal products. Confounding the problem, due to governmental dairy check-off programs, dairy fats have tripled in the form of cheese - rising over 300%. It's important to note that animal protein promotes cancer growth by triggering the release of a cancer producing hormone IGF-1. Because low-carb diets are based on animal products, they are associated with an increased risk of all-cause mortality whereas a diet based on whole natural plant foods lowers the risk and prevents/reverses chronic disease. For more information, see Dr. John McDougall's Wheat Belly and Grain Brain article here. 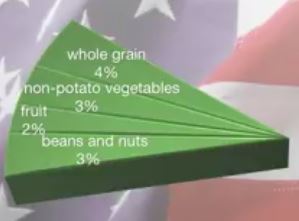 American diet severely deficient in whole plant foodsAt the same time, fruit and vegetable consumption has remained unchanged. The majority of Americans do not consume the recommended 5-9 servings a day with 96% not meeting the minimum for green vegetables. Unfortunately, it gets worse. Only 4% of Americans meet the minimum servings of legumes per day. Total daily calorie consumption of legumes is only 7-11, which is just 2 beans! Similarly, 99.5% of Americans don't meet the minimum requirement for whole grains. Simply put, nearly 90% or more of the calories consumed daily come from meat, dairy, eggs, refined grains, processed oils, butter, and processed junk food - leaving a mere 10% of calories coming from disease-fighting, natural, whole plant foods. (See our blog Calculate Your Healthy Eating Score.)

Taking the above figures into account, Americans eat a micronutrient and fiber deficient diet, high in refined carbs and fat. Thus, it's easy to understand why our country suffers from an epidemic of poor health and obesity related diseases. Please take the time to review the data below, which shows how deficient the typical American diet is.

(1) Americans are deficient in vegetable intake

(3) Meat, poultry and egg consumption are above the recommended limits

(10) American diet is deficient in legumes

(11) American diet is deficient in red and orange vegetables

(16) Linda Carney MD - Show me the Science Pinterest Board

(17) The Myth of Moderation

(18) A Visual Guide to Healthy Eating

(21) How Industries Keep you Coming Back for More