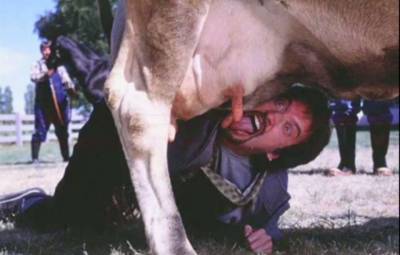 Rip Esselstyn, author of The Engine 2 Diet and Plant-Strong (Previously titled "My Beef With Meat"), often shows the image of a man drinking milk from a cow during his presentations to drive home the point that humans are the only mammals on the planet which consume the mother's milk of another species. Milk really is designed to be baby cow growth fluid. It's purpose is to grow a baby calf (depending on the breed) from 40-70 lbs at birth to 400-800 lbs within just six months.

There are many great videos on the Internet of Rip Esselstyn. One I particularly like is this TED talk (embedded below) in which Rip delivers an excellent 17-minute presentation regarding the risks associated with the typical American diet. Rip's claim to fame began when he inspired his Engine 2 Fire station in Austin, Texas, to switch to what he now refers to as a Plant-Strong diet. The results were astounding. His team not only lost extra weight, but they also reversed many illnesses including heart disease.

A local newspaper article and a radio interview followed. He was then approached with a book deal, was hired by Whole Foods Market and has appeared on numerous television programs and movies (including Forks Over Knives) as a champion of the whole-food, plant-based, no-oil lifestyle.

I was fortunate to have met Rip while attending the American College of Preventive Medicine which held their annual convention in 2008 in Austin, Texas. Clarence Ing MD invited me to a meal together with Rip and his parents Caldwell Esselstyn Jr. MD and Ann Esselstyn as well as T. Colin Campbell PhD and John McDougall MD (yes, I almost had to pinch myself to make sure this was real) at Casa de Luz, a famous local vegan macrobiotic restaurant. A short time after this wonderul evening Rip approached me about becoming the Medical Director for his Engine 2 Immersions for employees of Whole Foods Market. I will forever be grateful for that opportunity!

Watch Rip's TED Talk and be encouraged to begin your journey to better health today!

Are Ear Infections Normal?
Share Healthy Habits with Your Children