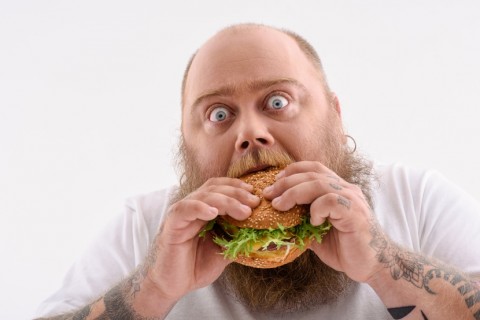 We see the evidence of over estrogenization all around us. Men and women, boys and girls in modern society are all suffering. Over estrogenization is closely related to the amount of excess weight we carry. According to the Center for Disease Control and Prevention (CDC), 70 percent of adults are overweight, and nearly 38 percent are obese. Seventeen percent of children ages six to 11 are obese, and the obesity rate for teens is 20 percent. Type 2 diabetes, hypertension, and cardiovascular disease are all complications associated with overweight. But the effects of too much estrogen are similarly damaging, and we do not need to be overweight or obese before we experience the effects. Breast and prostate cancer are both related to excess amounts of estrogen. Women suffer from heavy, painful periods and difficult menopause. Too much estrogen causes girls to go through puberty too early even while excess estrogen delays puberty for boys.

Eating meat is one of the eight factors which contributes to over estrogenization. In modern farming practice, animals are exposed both intentionally and unintentionally to excess estrogen. When we eat the flesh of these animals, we are likewise exposed to excess amounts of this hormone.

One tactic farmers use to raise production and profits is giving cattle subcutaneous implants of estrogen, alone or in combination with other hormones. This causes the animals to mature and put on weight faster, speeding their entrance into the human food chain. But a more insidious source of estrogen is poultry litter (also called broiler litter). The University of Missouri Extension Office explains it this way:

Beef cattle have the ability to digest low-cost feedstuffs that are not usable by other livestock species. One such feedstuff is poultry litter, which provides opportunities for both the poultry producer and the beef cattle producer. The large quantities of litter produced during modern poultry production are expensive to dispose of safely; moreover, protein is typically the most expensive ingredient in ruminant diets. Feeding poultry litter is a means of disposing of a waste product while concurrently supplying a low-cost protein feed to beef cattle.

According to the University of Arkansas Division of Agriculture, there is currently "no federal laws or regulations [controlling] the sale or use of broiler litter as a feed ingredient." Although not fed to milk cows due to possible drug residues from the medications given to poultry, litter is fed to brood cows and stocker cattle (cattle headed for the beef market).

Chickens aren't the only animals who excrete hormones in their waste; all animals do, including humans. The runoff from farm and other waste makes its way into the water cycle, and is a possible source of estrogen exposure for fish. National Geographic reports that 19 natural wildlife refuges in the Northeast are teeming with fish exhibiting signs of estrogen exposure. Scientists are finding that 60 to 100 percent of smallmouth male bass in the refuges have eggs developing in their testes.

Of course, not all estrogen comes from an animal's food or environment. Cows and other female animals naturally produce estrogen. When we eat their meat, we are exposed to the natural estrogens which those animals produce.

Eliminating meat and animal products from our diet is an important way to limit our exposure to excess estrogen. When we eliminate meat, we also eliminate a significant source of cholesterol, and we lower our risk of cancer and heart disease.

Other blogs in this series: Milk Makes Estrogen Levels Rise

(2) What are the Consequences of Consuming Iron from Meat?

(3) The "Not-So-Manly" Drawbacks from Eating Meat

Food Sources of Protein and Risk of Incident Gout in the Singapore Chinese Health Study.