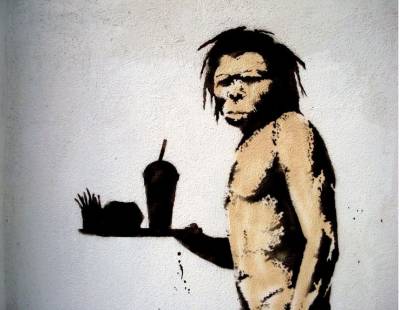 The "Paleo" diet or "Caveman" diet has recently become a popular diet, especially among some fitness groups such as CrossFit.  The Paleo diet is a modern day diet based on the presumed ancient diet of early man during the Paleolithic Era.

There are many aspects of this diet which are health promoting, such as the addition of fruits, vegetables, and nuts and seeds.  Other beneficial attributes include the avoidance of dairy products, processed snack foods, and alcohol.  However, legumes, grains, and starchy vegetables have also been eliminated which are beneficial and are a significant part of a whole-food, Starch-Smart® diet.  The Paleo diet centers its meals around animal products, much like the typical American diet, and is high in saturated fat and low in carbohydrates.  Advocates state that the high percentage of animal products to whole plant food is a key feature of this diet with sausage, bacon, lard and tallow being acceptable.

A review in the Journal of the American Meat Science Association published a list of toxic residues and contaminants found in meat including heavy metals such as lead, mercury, arsenic, and cadmium as well as excessive amounts of mercury in fish.  Dr. Greger questions the soundness of the Paleo diet in this two minute video, "Paleolithic Lessons."

Dr. Michael Greger challenges the theory that early man ate large quantities of meat.  Using one of his many references, Dr. Greger points out that man living in the Paleolithic Era ate "huge amounts of whole plant foods."  The dietary fiber content was estimated at 100 grams per day, which can only be obtained by consuming a diet predominately of whole plant foods.   The study he highlights also illustrates high levels of vitamin C intake equivalent to 10 oranges, calcium intake equal to 5 cups of collard greens, and vitamin E found in 2 cups of nuts.  In fact, humans consumed so much vitamin C during the Paleolithic Era, that modern man has lost the ability to synthesize or manufacture this vitamin.

For more information regarding the Paleo diet, see:

(2) The Paleo Diet Is Uncivilized