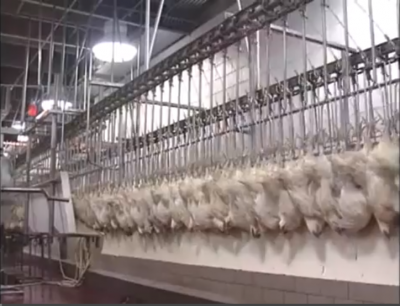 Every year, hundreds of thousands of pounds of meat are recalled due to bacterial contamination. Poultry products in particular contain high levels of fecal bacteria. How does this happen? Part of the reason is due to the chickens standing in their feces while confined in filthy living quarters. Cages are also stacked several rows high so feces from birds above drop down onto the birds below. Likewise, chickens defecate on themselves and one another during transportation. More importantly, fecal bacteria from the birds' intestinal tract are present at the time of slaughter and transfers from one bird to another. This takes place in several areas of processing:

The USDA training video below demonstrates these processing procedures. Although the birds are checked for visible fecal matter, large processing plants can slaughter more than a million birds per week, 30,000 chickens per hour, or 140 birds per minute, which provides minimal time for inspectors to visually inspect every bird. "Feces consist of undigested food, dead cells, hepatically excreted compounds, bile, digestive juices, parasites, and live bacteria." After packaging, fecal bacteria is then passed onto consumers, however, fecal traces are not typically visible.

According to the PCRM article, The Five Worse Contaminates in Chicken Products a federal inspector said, "We often see birds going down the line with intestines still attached, which are full of fecal contamination. "...However, we can do nothing to stop that bird from going down that line. It is more than reasonable to assume that once the bird gets into the chill tank, that contamination will enter the water and contaminate all of the other carcasses in the chiller. That's why it is sometimes called fecal soup." As the birds are soaking, they absorb the contaminated water into their muscle - which adds weight. Since chicken is sold by the pound, this results in higher profits for the industry. Dr. Neal Barnard does an excellent job explaining how this fecal soup ends up on dinner plates in this 2-minute video.

What percentage of poultry products are contaminated? A USDA study conducted in 2009 found that 87 percent of chicken carcasses tested positive for E. coli after chilling - prior to packaging. Based on over 5,000 samples, a 2010 FDA retail meat report stated 95 percent of chicken breasts were contaminated with fecal bacteria. In 2012, scientists with the Physicians Committee for Responsible Medicine tested retail products from 15 grocery stores in 10 cities in the U.S. where half of the products were positive for fecal bacteria. See the list of stores tested here. Consumer Reports tested over 300 chicken samples from 26 states showing over 97% of products testing positive.

Feces from poultry products are easily transferred throughout the entire kitchen as well onto other family members. Click here to watch how bacteria can spread when the product is washed under running water. Besides E.coli, two other types of bacteria, Salmonella and Campylobacter are also found in poultry including organically raised poultry. A study revealed Salmonella and Campylobacter "all over the kitchen—on the cutting board, the utensils, on their hands, on the fridge handle, on the cupboard, the oven handle, doorknob and everything." Interestingly, researchers in Arizona found more fecal bacteria in the kitchens (of those that eat meat) than in their bathroom toilets. After swabbing both the kitchen and bathroom, more bacteria was found on kitchen sponges, dish towels and the sink drain than the toilet. "Even after bleaching everything twice, in a meat eater's house it is safer to lick the rim of the toilet seat than the kitchen counter top..." Dr. Michael Greger adds that there is "no such thing as the 24-hour or 48-hour stomach-flu." When people are home sick with the "stomach bug" what they likely have is food poisoning. "Frankly, you know that chicken juice isn't juice, it's raw fecal soup."

Salmonella is the "leading cause of food poisoning requiring hospitalization, and the #1 cause of food-related death." Salmonella can trigger Reiter's Syndrome, "where you come down with Salmonella food poisoning once, and you can end up with chronic, debilitating arthritis for the rest of your life." In some cases, campylobacter can create severe complications and even cause nerve damage and paralysis in an autoimmune condition called Guillain-Barre syndrome. Patients can be paralyzed and as a result, end up on a ventilator since they are unable to breathe on their own. The severity of campylobacter poisoning varies. The woman in this video was hospitalized for 7 weeks and in a wheel chair for two years. She now requires a walking cane.

"While consumers are counseled by the USDA to apply high cooking heat to poultry products, this treatment simply cooks the feces along with the muscle tissue and does nothing to remove it from the ingested product." What consumers are not well aware of is that it's perfectly legal for industries to sell Salmonella-infected meat. According to an Alabama poultry science professor, "The fact is that it's too expensive not to sell salmonella-positive chicken...." The industry knows the dangers associated with selling contaminated meat products, however, they place the responsibility and blame on the consumer for improper handling or cooking methods. Sadly, many children have died as a result from contaminated meat products.

"More and more people are realizing that chicken is anything but a healthful, wholesome food," says Joseph Gonzales R.D., L.D., a registered dietitian with the Physicians Committee. "Adding grilled chicken to your salad or sandwich can actually add carcinogens, chlorine, cholesterol, super-bugs — and worst of all, feces."

(4) Why is it Legal to Sell Unsafe Meat?

(8) Salmonella in Chicken & Turkey: Deadly But Not Illegal

(9) Unscrambling the Truth About Eggs (Salmonella)

(11) Prevalence of Campylobacter, E. coli, and Salmonella in Retail Chicken

Food Sources of Protein and Risk of Incident Gout in the Singapore Chinese Health Study.