Be a Part of the Plant-Pure Nation Movement! 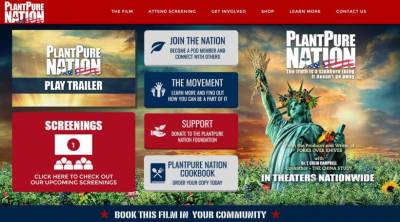 Have you ever wanted to shout, "What is the truth?!" as you sift through the conflicting health advice available on the internet and elsewhere? If so, then you'll want to watch PlantPure Nation. This documentary will not only show you the truth about how to achieve optimal health, but will help explain WHY it's so difficult to uncover this information.

PlantPure Nation is the story of one Kentucky legislator and one equipped citizen who wanted to make a difference in a state known for soaring rates of heart attacks, strokes, and diabetes plus one of the highest levels of childhood obesity. After doctors T. Colin Campbell and Caldwell Esselstyn testified before the Kentucky legislature about their research into plant-based nutrition, Rep. Tom Riner and Dr. Campbell's son, Nelson, worked together to introduced a bill that would document the benefits of a plant-based diet. Once the bill reached committee, powerful industry lobbyists effectively went to war against it. According to Rep. Riner, the bill turned from "steel to Reynolds Wrap" as money and political influence slowly killed the initiative. Throughout the telling of this story, the audience is treated to insights from leading experts, physicians, and authors who speak on the topic of achieving vibrant health in a society plagued with lifestyle-driven diseases and where information is actively suppressed.

Undaunted by the setback in Kentucky, Nelson Campbell returned to his hometown of Mebane, North Carolina, determined to use the power of people rather than the power of politics. Campbell began offering 10-day "jumpstarts" to demonstrate that plant-based nutrition is easy to follow, indefinitely sustainable, and produces health benefits quickly. Campbell, who directed PlantPure Nation, documented his successful jumpstart approach, providing a model that others could follow. Campbell has now turned his focus to promoting a grassroots movement of plant-based eating. You can sign up for more information about this movement at plantpurenation.com.

Believing that a health revolution is possible, The PlantPure Nation Foundation boldly states that "whereas industry and government have contributed to our health care crisis, people working together at the local level can help solve this problem." The goal of the foundation is to create PlantPure Pods in cities and towns across North America where members can use the film and the power of community to spread the healing message of plant-based nutrition. A cook book is available for those that are interested. View the documentary's trailer here and find a screening of the film and join the revolution at the PlantPure Nation website. We also encourage you to join a Pod at plantpurepods.com.

This summer, I had the pleasure of attending both of the Austin screenings of PlantPure Nation. I live in Texas where the hats are big and the steaks are bigger. Our barbecue joints are famous, and our official state food is "chili con carne" (chili with meat). So the audience of Texans had some thinking to do after listening to the facts about meat, dairy, and eggs. The documentary was sold out both nights, and after the film I was asked to field questions from the audience. It was thrilling for me to watch as people wrestled with and began to grasp the value of plant-based eating. I highly recommend that everyone watch the documentary--but not alone. Take a friend. Take a family member. This message needs to get out, and people need to be warned about the lifestyle diseases they can eat themselves into. An oil-free diet of vegetables, beans, whole grains, and fruit can really help to prevent and treat cardiovascular disease, diabetes, obesity, and arthritis. Check out PlantPure Nation. Then check out the produce section of your local grocery store. Let today be the day your PlantPure journey begins!

An Apple a Day Keeps the Doctor Away!
Are Allergies Linked to Nutritional Factors?