Are You "Dying" to Lose Weight? 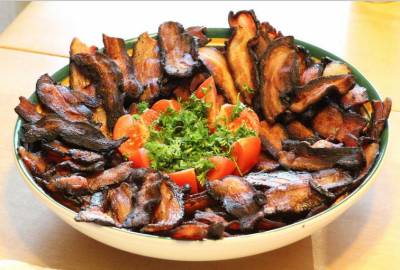 High-protein, low-carbohydrate diets, such as the Atkins diet, have become very popular, but is it possible to safely lose weight on such a diet without damaging our health? Dr. Joel Fuhrman addresses this concern in his article, The Atkins Cancer Revolution, and convincingly argues:

"You can lose some weight on the Atkins diet plan, but you will damage your health at the same time. The popularity of the Atkins diet plan and other high protein diet books is evidence that people are looking for a quick, effortless way to lose weight without having to curtail their dangerous love affair with rich, unhealthful foods. People are desperate to lose weight and these high protein diet books preach what people want to hear: you can eat lots of cholesterol and saturated fat and still lose weight. This romance can lead to tragic consequences, with some people literally dying to lose weight."

It's important to realize, that significantly restricting carbohydrates results in a condition called ketosis. The body believes it is deprived of calories, even though plenty of high-fat foods are being consumed. As soon as a person stops the diet and resumes eating even moderate amounts of healthy carbohydrates such as beans, fruits and vegetables, ketosis ends. Consequently, the weight that was lost will be gained back, plus more. Animal products once again become fattening. Staying on the diet, Dr. Fuhrman says, risks premature death. He explains ketogenic weight loss in more detail, stating:

"Meat consumption leads to weight gain, unless you have caused a carbohydrate-deficiency ketosis. High fat diets are unquestionably associated with obesity, and meat eating actually correlates with weight gain, not weight loss, unless you radically cut carbohydrates out of your diet to maintain a chronic ketosis. Researchers from the American Cancer Society followed 79,236 individuals over 10 years and found that those who ate meat more than three times per week were much more likely to gain weight as the years went by, compared to those who tended to avoid meat. The more vegetables the participants ate, the more resistant they were to weight gain."

The Atkins diet consists primarily of "high-fat, high-protein, fiber-less animal foods" while severely limiting carbohydrate rich plant foods. A typical Atkins diet menu boasts more than 90% of calories from animal products; significantly more than what would be consumed even on the standard American diet. According to Dr. Fuhrman,

Although low-carb, high-protein diet advocates claim their diet is based on solid scientific evidence, these diets pose serious health risks. A diet high in animal products significantly increases the risk of cancer in years to come, as Dr. Fuhrman points out:

"Atkins devotees adopt a dietary pattern completely opposite of what is recommended by the leading research scientists studying the link between diet and cancer in the world today. Hundreds of scientific studies have documented the link between animal products and various cancers. It is now clear that increased consumption of animal products, combined with the decreased consumption of fresh produce, has the most powerful effect on increasing one's risk for various kinds of cancer. It is not only that the Atkins diet plan is incredibly high in saturated fat. It is that his menus prohibit and restrict the foods known to offer powerful protection against cancer."

"The study showed the blood flow to the heart diminished by an average of 40% after one year on such a high saturated fat, high protein diet, and increased inflammatory markers that predict heart attacks. In contrast, a low saturated fat diet given to the control group improved blood flow to the heart by more than 40%. This study clearly illustrated a high protein diet is too dangerous for anyone to consider, even for a short time."

Additional supporting evidence implicates other serious health consequences associated with ketogenic diets. Diets similar to the Atkins diet have been utilized in treating children with seizure disorders. These findings affirm:

"Investigators report a greater potential for adverse events than had ever been anticipated. The dangers of these high protein diets include hemolytic anemia, abnormal liver function, renal tubular acidosis, spontaneous bone fractures (despite calcium supplementation), and many more. Kidney stones formation is another risk of high protein diets. These studies point out that there are many subtle adverse outcomes not being attributed to this dangerous way of eating."

Given these points, the safest way to lose weight without serious health consequences, would be to adopt a diet rich in healthy carbohydrate containing plant foods. View Dr. Fuhrman's article, "The Atkins Cancer Revolution" here.

(3) Who has Heart Disease? Everyone?