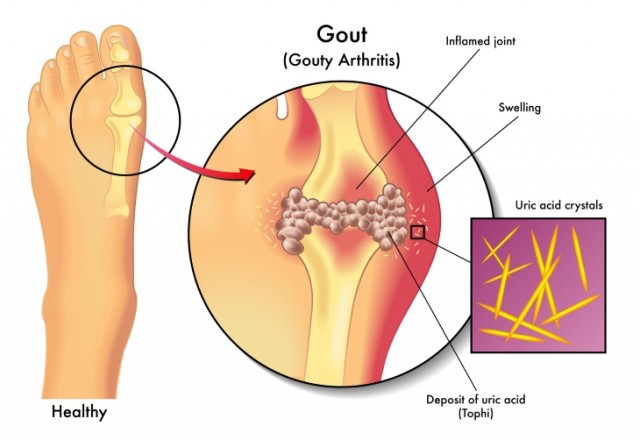 About 2 billion people in the world consume alcoholic drinks. Americans spent approximately 219.52 billion dollars on alcoholic beverages from 2006 to 2015. To the people manufacturing alcoholic beverages, these are great figures, healthful to their bottom line. While alcoholic beverage producers are smiling to the bank, the consumers of their products may end up in the hospital, or worse. Numerous studies have shown that alcohol is a major contributor to the development of several diseases, such as cancer, pancreatitis, liver disease, osteoporosis, and gout.

Gout is a painful and inflammatory form of arthritis caused by high levels of uric acid floating in the blood. Some of the symptoms of gout include intense pain, swelling in the joint, and stiffness of the joint. An estimated 8.3 million Americans were affected by gout between 2007-2008, according to data obtained from the 2007-2008 National Health and Nutrition Examination Survey. The findings of a 2004 study published in the Lancet Journal reveal that men who are regular consumers of beer and spirits had 50% and 15% higher chances of developing gout than rare- or non-consumers of alcoholic drinks.

In addition to alcohol, alcoholic drinks, such as beer and spirits, also contain purines and other substances. Regular intake of alcohol increases the purine concentration in the blood. Purine is broken down in the body to uric acids. Under normal circumstances, the kidneys remove uric acid from the blood and eliminate it from the body via the urine. However, when plasma concentrations of uric acid are exceedingly high, the homeostatic mechanism involved in the excretion of uric acids from the body is overwhelmed, leading to the formation and deposition of needle-like uric acid crystals in the joints. These needle-like crystals trigger inflammation and pain in the joints and surrounding tissues commonly associated with gout attack.

Another Reason to Avoid Alcohol

There are countless number of reasons you should avoid consuming alcoholic drinks. One of them is that you do not want to be among the millions of people suffering from gout. Avoiding alcoholic drinks may help cut down your chances of developing this painful joint disease.

(2) Arthritis Foundation- What is Gout?

(5) The Correlation Between Alcohol and Gout.

(6) A Meta-analysis of Alcohol Consumption and Risk of Gout.