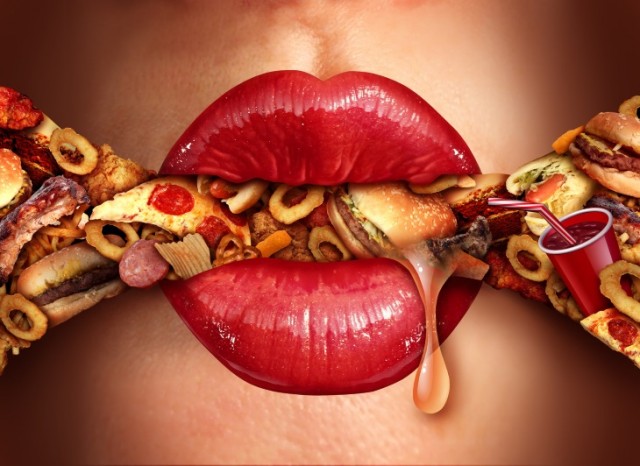 Like the tobacco industry, today's food manufacturers have discovered how to separate foods and put them back together again with super-saturated concentrations of sugar, fat and salt so that they produce effects similar to that seen in drug addiction. This addictive combination keeps customers coming back for more. These flavors "seduce our taste buds" by stimulating our brain's pleasure center, causing us to crave the artificial hyper-palatable concentrated flavors over the natural flavors in whole unprocessed foods; creating a dopamine rush. Using PET scans, scientists are able to see how different foods affect the brain's "dopamine reward system." Tests performed on refined sugars as well as high fat foods produced these changes whereas foods that are lower in fat and calories do not create dopamine surges.

According to Dr. Michael Greger's video, "People who regularly eat ice cream—sugar and fat—have a deadened dopamine response in their brains to drinking a milkshake. It's like when drug abusers have to use more and more to get the same high. Frequent ice cream consumption is related to a reduction in reward-region responsivity in humans—they're talking about the pleasure center, paralleling the tolerance observed in drug addiction. Once you've so dulled your dopamine response, you may subsequently overeat in an effort to achieve the degree of satisfaction experienced previously, which contributes to unhealthy weight gain."

Refined sugary and fatty foods are highly-palatable, calorie-concentrated foods. When stimulated, dopamine (a neurochemical) is released, resulting in pleasurable thoughts and feelings towards those particular stimuli. Our brains react by demanding "more!" The degree to which we derive pleasure correlates to the amount of dopamine that our brain releases. Highly-palatable foods produce a "numbing of the dopamine response." Dr. Gregger reports, "Consumption of a calorie dense diet compared to the same number calories in a calorie dilute diet leads to that numbing of the dopamine response. It's like the difference between cocaine and crack. Same stuff chemically, but by smoking crack cocaine we can deliver a higher dose quicker to our brain."

Some have proposed that overeating be classified as an official mental disorder, since "obesity and addiction share the inability to restrain behavior in spite of an awareness of detrimental health consequences."

We can prevent our brain's pleasure center from becoming "deadened" by adopting a diet rich in whole nutrient-dense, high-fiber, natural foods that are calorie dilute. According to Dr. Greger, "This can help bring back our dopamine sensitivity such that we can again derive the same pleasure from the simplest of foods. And this is not just for people who are obese. When we regularly eat calorie dense animal and junk foods like ice cream we can so blunt our pleasure that we may overeat to compensate, but when our brain down-regulates dopamine receptors to deal with all these jolts of fat and sugar we may experience less enjoyment from other activities as well."

Dr. Greger adds, "That's why cocaine addicts may have an impaired neurological capacity to enjoy sex, why smokers also have an impaired ability to respond to positive stimuli. Since these all involve the same dopamine pathways, what we put into our body--what we eat--can affect how we experience all of life's pleasures."

For more information regarding food addiction, click on the following links:

(3) Which Foods are the Most Popular?

(5) Losing Weight Without Losing Your Mind

Why Have We Become Food Addicts?