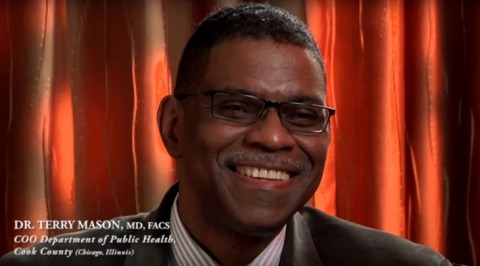 Relatively early in my Type-1 diabetes adventure I discovered that a low-fat plant based diet was key to full health. This discovery was due to a frantic effort in blood-sugar control for fear of all the debilitating complications that I had witnessed in other diabetics. After discovering the elevated level of health provided by a low-fat whole food plant based diet, I expressed what I had learned to others. However, no one accepted that such a diet would be good for them. I explained the benefits of insulin sensitivity and how any fat calories over 10% and any animal products at all degrades it. A few watched the Forks Over Knives documentary, but their reaction was a shrug of the shoulders and made no changes. I found this mystifying. The science and evidence is just too concrete; how can anyone not accept it? I am often told that it is not easy to change and that I just have a lot of willpower... Willpower? I don't think so.

Finally, I got my answer from Dr. Terry Mason. He explains in this video that knowing and believing are not synonymous and that to accept something in your life, you must believe it - not just know it. Initially, that didn't make sense to me. How can you know hard facts and not believe them? As I pondered Dr. Mason's explanation, it slowly became clear that it is belief that supplies the power for change. Belief is a part of your being. It is something in your heart. It is personal. Belief voids any restriction such as effort, struggle, difficulty, sacrifice, etc. Belief creates passion. For example, if you are exhausted with aching feet, knees and legs and you just want to sit and rest - but then if you learn that your child or loved one is in mortal danger, you will have no trouble running flat-out full-speed to rescue them. Indeed, it would be difficult to restrain you.

Consider that every extraordinary act, every incredible feat or accomplishment by anyone, was because they believed in doing what they were doing. Burt Munro believed that even as a poor construction worker with no formal education, he could break the Bonneville salt flats land speed record with this 1920 Indian Scout motorcycle. With nothing but old scrap tools and unyielding passion he modified his 47-year-old motorcycle and at the age of 68 in 1967 - he did indeed break that record. (As of 2016, his record still stands.) Mahatma Gandhi believed that he could lead an impoverished India to win their war for independence against the mighty Great Britain without firing a shot or injuring anyone - and so he did just that. Fauja Singh believed that at the age of 90, he could run a marathon. Not only did he run it, he broke the London Marathon record. Continuing to follow his belief, he broke the Ontario Masters marathon record at the age of 100 - and then again in the Hong Kong marathon at the age of 102. The movie, Hacksaw Ridge, portrays Pfc. Desmond T. Doss as having tremendous willpower to suffer the humiliation and ostracization for his pacifist belief and then to save 75 infantrymen in the line of fire. His strength, however, was not willpower nor bravery; it was belief. He simply could not have done anything different. John Newton, who lived a horrendous, vile life was taught right from wrong, but did not understand what he knew enough to believe or live it. Eventually, as he learned from life's experiences, it all became clear. With that, in the year of 1773 he wrote, "How precious did that grace appear the hour I first believed" (which later became the lyrics of the hymn, "Amazing Grace").

This level of belief is not reserved for the famous or special. It is literally in all of us. It is a level of understanding. When the understanding reaches a milestone, it becomes clear and you automatically take it to heart. At that point, willpower is no longer a factor. Before I believed the absoluteness of a low-fat whole food plant based diet, I would have never had the willpower to adopt it. But now, after it became clear to believe, I do not have the willpower to even sample anything on the Standard American Diet.

Willpower? I don't think so.

I am not a medical professional in any capacity. this writing is only to share my experience and what I have learned from it.

Be Careful What You Pray For!