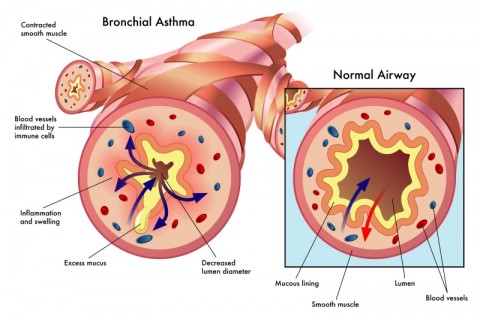 According to the Center for Disease Control and Prevention (CDC), over 24 million people are living with Asthma in the United States. Asthma is a chronic lung disease that inflames and narrows the respiratory tract which coveys air to and from the lungs. An episode of asthmatic attack is associated with coughing, chest tightness, shortness of breath, recurring period of wheezing (a whistling sound made during breathing), and in severe cases death. Americans spent billions of dollars every year on asthmatic drugs and inhalers. However, the findings of a Swedish study have revealed consistent consumption of healthy plant foods can help relieve asthmatic symptoms and reduce the frequency and severity of asthmatic attacks.

A team of researchers from the Swedish Health Institute conducted a one-year clinical trial on 35 patients who had been diagnosed with bronchial asthma for an average of 12 years; these patients were all on medications. All the participants in this study were placed on vegan diets, meaning they consumed plant foods only. 11 patients opted out of the clinical trial, but the remaining 24 patients completed the study.

After only 4 months of consuming plant foods, 71% of the subjects reported a significant improvement in asthmatic symptoms and 92% reported a marked reduction in the severity and frequency of asthmatic attack after one year of dietary intervention. At the end of the study, almost all the subjects had reduced their drug intake or completely stopped taking their medications. The authors of this study concluded that strict adherence to a vegan dietary regiment may help to reduce the frequency and severity of asthmatic attack and drastically cut down the need for medications in asthmatic patients.

Asthma accounts for more than 2 million emergency room visits in the United States each year. Unfortunately, a sizeable number of patients who experienced an episode of asthmatic attack do not survive their ordeal. Asthma kills about 11 people each day in the United States, and over 4,000 persons die each year from the disease. Eating whole food plant-based diets can go a long way towards helping asthmatic patients improve their conditions, decrease their needs for medications, and reduce the severity and frequency of asthmatic attacks.

(4) How a Vegan Diet Can Treat Asthma