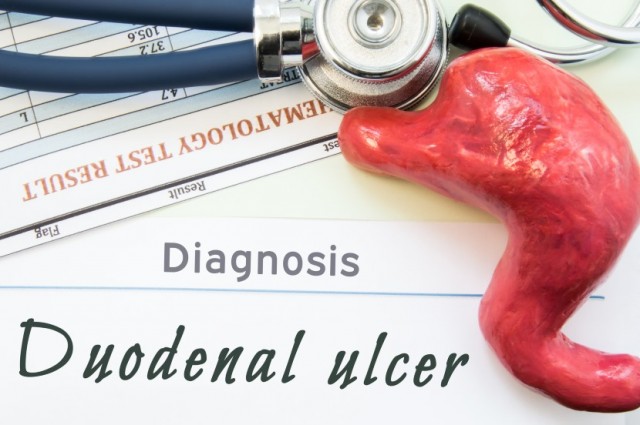 Generous consumption of fiber-rich foods brings many health benefits, including maintenance of healthy weight, blood sugar levels, cholesterol numbers, and bowel movement function. Now a study published in the Canadian Family Physician Journal has added another reason why we all should create more space for fiber-rich whole-plant foods on our plates: High fiber consumption can reduce the risk of developing a duodenal ulcer.

A team of Canadian researchers wanted to find out if dietary and lifestyle choices play a role in reducing or elevating the risk of duodenal ulcer so they collated and analyzed data extracted  from studies published between January 1966 to December 2001 that investigated the association between lifestyle and dietary habits and the occurrence of duodenal ulcer. The research team discovered that high-fiber diets, especially those rich in soluble fiber from fruits and vegetables, were beneficial in the prevention of duodenal ulcers. The researchers therefore concluded that adequate intake of foods rich in fiber may help to protect individuals against duodenal ulcer.

The bacterium Helicobacter pylori is believed to play a significant role in the development of duodenal ulcer, though "only a few people with H pylori infection eventually develop ulcers." Many researchers believed that H pylori infection alone is insufficient to cause ulceration and that other factors, such as chronic use of non-steroidal anti-inflammatory drugs (NSAIDS) and unhealthy lifestyle and dietary habits, such as the use of alcohol and tobacco, may combine with H pylori or act through a separate mechanism to cause ulceration.

Duodenal ulcer is associated with a large acid load to the duodenum caused by several factors, including increased acid secretion by the stomach and insufficient pancreatic secretion. Fiber, especially soluble fiber, slows down the release of digested food materials from the stomach to the duodenum, thereby reducing the exposure of the duodenum to gastric acid. This action of dietary fiber makes high-fiber foods essential for protecting the lining of the duodenum from gastric acid-induced sores and ulceration. Dietary sources of fiber include whole grains, fruits, vegetables, legumes, nuts and seeds. Remember that fiber is only found in plants. Regular intake of these whole-food plant-based fiber-rich foods may offer individuals significant protection against duodenal ulcers. What kind of food will you choose?

(2) How Diet and Lifestyle Affect Duodenal Ulcers: Review of the Evidence