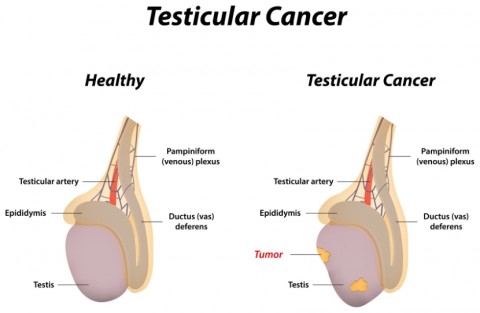 Testicular cancer rates have almost doubled in the United States since the mid-70s. Between 1975 and 2014, the number of testicular cancer cases went from 3.8 per 100,000 to 5.7 per 100,000 in 2014, according to the National Cancer Institute. More than 9,000 American males are expected to be diagnosed with testicular cancer in 2018. For men between the ages of 15 – 44, cancer of the testicles is the most commonly diagnosed cancer. Testicular cancer occurs when cells in the testicle, the male reproductive organ, begin to reproduce uncontrollably and may even spread to other organs in the body.

Evidence from several studies have implicated unhealthy dietary choices as a contributing factor to the development of testicular cancer. A 2003 study that examined the link between diet and testicular cancer revealed that men who regularly consumed generous portions of cheese were almost 90 per cent more likely to develop testicular cancer than men who ate little or no cheese. Another study published in the Journal of Cancer Epidemiology, Biomarkers, and Prevention showed that a 37 per cent rise in the risk of testicular cancer was associated with regular intake of 20 servings of milk per month in adolescents. The researchers hypothesized that the hormones, galactose, and fat present in dairy products may be responsible for the cancer-promoting effects of milk and cheese.

Cancer of the testicles is the most prevalent cancer among young men in Western nations. This cancer was responsible for about 400 deaths in the United States in 2017. This previously rare cancer is becoming increasingly common now, and dairy products have been implicated to play a significant role in the rising rates of testicular cancer. A diet devoid of dairy products can boost an individual's chances of avoiding testicular cancer.

Cannabis Smoking and Risk of Cancer: A Meta-Analysis of Observational Studies.

Consumption of alcoholic beverages in adolescence and adulthood and risk of testicular germ cell tumor.

Matt carter posted a comment in Sugar - How Sweet it is!
White Sugar is harmfull
1 day ago
Colleen Patricia Fedak posted a comment in Starch-Smartest
I see pepper is a NO-NO. I have read that to help the absorption of Turmeric that you should take ...
about 6 months ago
Isabelle Schweitzer posted a comment in Finding Relief for Inflammatory Bowel Disease (IBD)
I was wondering how Susie incorporated the Starchsmart method of eating and fueled her training. Di...
about 10 months ago
Sean Carney posted a comment in Curriculum Vitae of Linda Carney MD
I am Dr. Carney's husband and have no medical expertise. I just keep the web site running. Do you ne...
about 1 year ago