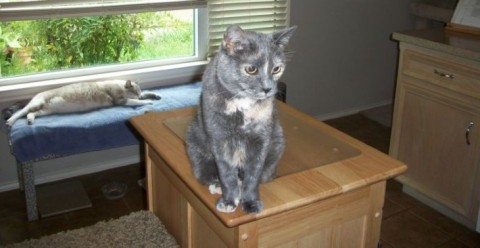 Callie is a very dear member of our family. She is a person who just happens to be a 14-year-old cat. She plays a very prominent role in the family. She supervises household work. She loves (demands) loving time which includes being carried around the house lying on her back in my arms like a baby while petting my face with her paw. She assumes the responsibility of alpha cat, keeping the boys; BJ and Blue-Eyes (also cats) in line with nothing more than a look. Nothing more is needed, however, as she has everyone's unfailing respect.

On June 6, 2016, we took Callie to an internal medicine specialist due to a steep decline in health. Over the previous few years, Callie's energy has been declining. For most of her 14 years, she has suffered routine, periodic bouts of painful, swollen joint inflammation. It was diagnosed as allergies and huge doses of weekly allergy shots were prescribed. The shots helped, but never completely eliminated the bouts. Missing a shot, however, guaranteed a painful, debilitating recurrence.

Her health continued to decline until late May 2016, when it took a steep down-turn as she became very lethargic; walking with her back bent unable to straighten her hind legs in obvious pain and weakness. She lost rectal continence with chronic diarrhea. Due to experience with two previous beloved cats; Kilo and Taz, we feared she may also have cancer.

With a powerful interest in health and nutrition, sparked decades ago by Type-1 diabetes, it has become clear that diet is paramount to health. From this interest, it has been found that the line separating species is very cloudy. At the cellular level, differences are relatively small. The major differences are anatomic. Over the past few years, we have learned about T.Colin Campbell's cancer research as described in his book "The China Study". In his research, he found that the immune system has the ability to detect and eliminate cancerous cells just as any other pathogen. He further discovered that animal proteins literally turn the genes for that function off. Eliminate animal protein and the genes turn back on again. It is then obvious why cancer is so prevalent in our society. While Dr. Campbell's research is not widely recognized in the medical community, there is growing research and evidence supporting his findings. As a primary care physician, Dr. John Kelly conducted tests with human patients with a near 100% correlation. He published his work in a book titled, "Stop Feeding Your Cancer". Just a few individual examples: Janette Murray, Dr. Ruth Heidrich and a local friend, Patty Falo have all reversed cancer with diet alone. Additional Knowledge was gained during the 2016 Marshal Health Fest with many speakers presenting the biological mechanisms of nutrition on cancer. Regarding that cloudy line separating species; the book, "Obligate Carnivore", by Jed Gillen was found and studied. Jed's book blurs the species line even further, shinning a very clear light on what the differences really mean. Carnivore digestion anatomy is insufficient and missing may elements for direct plant nutrition processing. As such, they are "obligated" to consume their nutrition second hand. This does not mean eating meat is optimal for their cellular biology. It just means that is the best they can do.

On June 6, the internal medicine specialist performed an endoscopy with several biopsies of Callie's stomach and upper small intestine. The biopsies revealed that both, her stomach and intestines were infested with lymphoma cells. The diagnosis: terminal cancer. The prognosis: 6 months to possibly a year of life left (with treatment). the prescription: chemotherapy and steroids.

After heart-breaking cancer experiences with two previous beloved cats. we refused the prescribed treatment. We reasoned that the rest of Callie's life was limited. We wanted her remaining time to be as comfortable as possible and that certainly would not occur with chemotherapy. We thought this would be a good opportunity - if not a desperate attempt - to see if Callie's cancer would respond as with Dr. Colin Campbell's, Dr. Kelly's and all the people who have beat cancer with a meat free diet. On the day of the diagnosis report, all of our cats; Callie, Blue-Eyes and B.J all became vegan.

Our decision was met with powerful resistance. Our veterinarian exclaimed that cats are "obligate carnivores" and then promptly resigned as our veterinarian. Even in the midst of negativity this decision was the only one that provided any sense of hope. Fortunately, we now have a new veterinarian that doesn't see a problem with vegan cats.

Within the first week of diet change, Callie's posture dramatically improved. Her hind legs stood-up straight. Her bent back straightened out. Her limp completely disappeared - completely. Her energy and alertness elevated. She stopped spending all her time sleeping in seclusion. As of this writing, all signs of joint inflammation are completely gone. Her allergy shots have been eliminated. She has been completely joint pain free ever since the diet change. Her energy is back. She has resumed her housework supervision duties. She now runs, jumps and plays - engaging in high-speed chase play with the boys - in contrast to barely being able to walk before the diet change. The only remaining indication of cancer is rectal incontinence, but that is progressively improving. The diarrhea is gone.

It is unknown if Callie will survive the cancer or if the absence of animal protein will actually cure her, but even if it has no other effect, her current state of improvement is absolutely worth it. Thus far, our intentions and hopes are playing true. Even if she does not survive the cancer, even if it shortens her life even more, she is not suffering the brutality of traditional cancer treatments. She is presently about halfway through her six months of life prognosis and in that time, she has gained more life than she has had in years. And that's with no chemo or any other treatments. We'll just see how it goes...

As an interesting side note: this experience is further evidence that taste is indeed a learned sense - even across the species line. Just last week, Blue-Eyes was (mistakenly) given a bowl of traditional meat cat food. He quickly reeled away from it wanting his vegan food back.