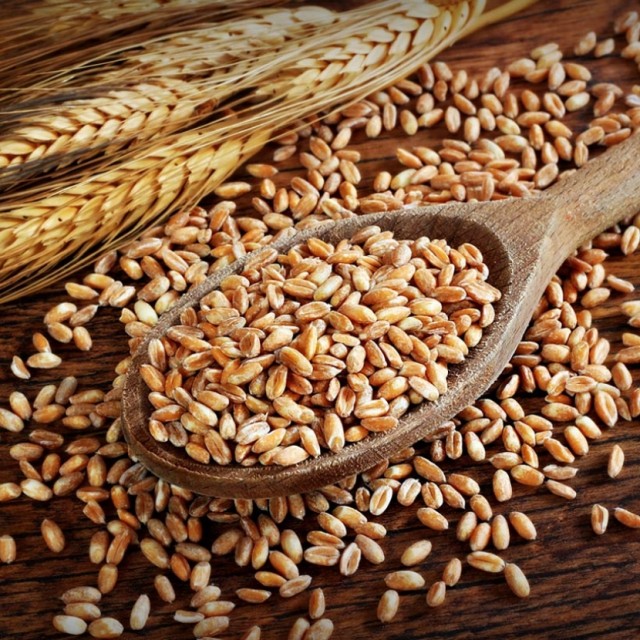 One of the concerns we hear about eating grains and legumes from the low-carb, high-protein advocates is that grains/nuts/legumes contain a compound called "Inositol hexaphosphate (IP-6)" or better known as the anti-nutrient phytic acid or phytate. Unfortunately, this compound has received a lot of both unwarranted and unfavorable publicity.

Phytate is a naturally occurring compound found in all nuts, seeds, legumes and grains. This compound has been negatively labeled as a "mineral absorption inhibitor." This is why we hear that we should soak and sprout our legumes-grains-seeds before consuming them. This procedure eliminates some of the phytic acid which is believed to inhibit the absorption of minerals such as calcium.

High-protein proponents such as the Weston Price Foundation have gone to elaborate lengths to vilify the consumption of foods containing phytic acid as seen in their article "Living With Phytic Acid". The Weston Price Foundation (WAPF), a small but popular non-profit organization, (and active lobbying group) advocates eating a high-saturated fat diet consisting of glandular organ meats, oils, raw milk and butter, while limiting fruits and vegetables for children. They also recommend "regular ingestion of clay."

Its founders and board of directors, Sally Fallon and Mary Enig (authors of Nourishing Traditions) promote a "smorgasbord of woefully outdated and potentially dangerous advice." For example, they suggest, "If you cannot get your family to eat organ meats when served as such, there are plenty of ways to add them to their food without their knowledge... Poached brains can be chopped up and added to any ground meat dish, as can grated raw liver." They claim that our bodies suffer serious consequences, even mental retardation, from going into "mineral starvation mode" when including grains in our diets. Readers are cautioned and advised not to consume a diet high in grains, legumes, seeds and corn due to serious mineral deficiencies and other serious health complications. (Interestingly, according to the Weston Price Foundation, Sally Fallon has no formal nutritional background or degree, just a B.A. in English.)

Additionally, low-carb advocates such as Dr. Robert Atkins and former Weston Price Board of Directors member Stephen Byrnes, both experienced the consequences from following their own recommended diets. Stephen Byrnes, who enjoyed a diet including "butter, cream, eggs, meat, whole milk, dairy products and organ meats suffered a fatal stroke before he reached his 40th birthday." Simalarly, Dr. Robert Atkins had a medical history of being overweight and having a myocardial infarction, congestive heart failure, and hypertension. For more information regarding the WAPF, click on the links provided at the bottom of this article.

What are the Health Benefits of Phytic Acid?

Dr. John McDougall addresses the concerns regarding phytic acid in his article "For the Love of Grains."

"Grains are loaded with minerals; therefore, the more grains you eat the more minerals you consume. Phytic acid, also plentiful in grains, is considered an anti-nutrient because of its ability to bind with minerals, such as zinc and calcium, and prevent their absorption. Two often-cited examples of zinc deficiency are among people living in small communities in rural Iran and Australia (Aborigines). Multiple nutritional factors, not just phytic acid, were involved in both examples. Consumption of large amounts of unleavened bread seemed central to the development of zinc deficiency. Once the bread is leavened, then the activity of phytic acid is reduced, and zinc becomes readily available. Soaking, germination, boiling, cooking, and fermentation all inactivate phytic acid and free up minerals for absorption. In real-life situations, for otherwise healthy people, the consumption of grains in recommended amounts has had no adverse effect on mineral status. Phytic acid actually has many beneficial health effects—you won't want it out of your diet. It acts as a powerful antioxidant and has been shown to reduce blood sugar, insulin, cholesterol and triglycerides. Phytic acid is linked to a reduction in heart disease, diabetes, obesity, and other chronic diseases in people."

"Although phytic acid content of foods can affect mineral absorption somewhat (less than 20 percent), phytic acid is not toxic and it actually has beneficial properties as a potent antioxidant. Phytic acid is a phytochemical with significant anti-cancer and other health benefits such as reducing inflammation, lowering blood sugar and insulin, and protection against diabetes, Parkinson's, and even reduces kidney stone formation. Its effects on lowering mineral absorption in those eating healthfully is minimal (because of bacteria in the gut break its mineral bonding). It does lower iron and zinc absorption in the diet, but the effect on other minerals is negligible. Trying to keep levels low is not necessary as the bacteria in the digestive tract (as long as not taking antibiotics) help humans metabolize the excess phytic acid, minimizing the negative. I do not feel soaking and fermenting foods is necessary to remove phytates." (Dr. Fuhrman's Member Center - Ask the Doctor Forum)

A quick search of the internet reveals many health benefits from consuming the "Inositol hexaphosphate (IP-6)" or phytates contained in legumes, nuts, seeds, and grains. For example, an article in PubMed reports, "Recently, (IP-6) has received much attention for its role in cancer prevention and control of experimental tumor growth, progression, and metastasis. In addition, IP(6) possesses other significant benefits for human health, such as the ability to enhance immune system, prevent pathological calcification and kidney stone formation, lower elevated serum cholesterol, and reduce pathological platelet activity."

As a matter of fact, the scientific evidence confirms that whole grain and bean consumption lowers both total mortality and cardiovascular mortality as seen in my blog post "Eating Whole Grains Lowers Risk of Mortality" whereas a low-carbohydrate diet is associated with an increased risk of death as seen in this study entitled "Low-carbohydrate diets and all-cause and cause-specific mortality: Two cohort Studies" from the National Institute of Health, an article from John McDougall MD entitiled "The Smoke and Mirrors behind Wheat Belly and Grain Brain", a study "Low carbohydrate-high protein diet and incidence of cardiovascular diseases in Swedish women: prospective cohort study" published in the British Medical Journal, and this interesting Japanese study "Low-Carbohydrate Diets and All-Cause Mortality: A Systematic Review and Meta-Analysis of Observational Studies".

(1) New Mineral Absorption Enhancers Found - points out that the small percentage of minerals that are lost in our diets can easily be reversed just by eating "mineral absorption enhancers , such as garlic and onions" (which "influence the bioaccessibility of iron and zinc") or by eating another serving of whole plant foods.

(2) Phytates for the Prevention of Cancer - discusses how phytates offer cancer protection to those that consume plant-based diets.

(4) Phytates for the Treatment of Cancer - highlights a study conducted on women with breast cancer. "At the end of six months, the phytate group had a better quality of life, significantly more functionality, and fewer symptoms from the chemo, not getting the drop in immune cells and platelets one normally experiences."

(5) Phytates for the Prevention of Osteoporosis - reports how women who consume the most phytate containing foods such as grains, beans, and nuts have the highest bone density scores.

(6) How Beans Help our Bones - A study which examined the risk factors for osteoporosis concluded "Phytate consumption had a protective effect against osteoporosis, suggesting that low phytate consumption should be considered an osteoporosis risk factor." A follow-up study, "measuring phytate levels flowing through women's bodies and following bone mass over time, found the same thing: women with the highest phytate levels had the lowest levels of bone loss in the spine and hip. Those who ate the most phytates were also estimated to have a significantly lower risk of major fracture, and a lower risk of hip fracture specifically."

(7) Phytates in Beans: Anti-Nutrient or Anti-Cancer? - The potential side effects of phytates are: "Less heart disease, less diabetes, and fewer kidney stones."

(8) What are Phytates? And Could They Help Prevent Colon Cancer? - This study suggests that phytates in beans offers more protection against colon cancer than fiber because phytate inhibits a particularly dangerous type of free radical.

A paper in the International Journal of Food Science and Technology reports: "Given the numerous health benefits, phytates participation in important intracellular biochemical pathways, normal physiological presence in our cells, tissues, plasma, urine, etc., the levels of which fluctuate with intake, epidemiological correlates of phytate deficiency with disease and reversal of those conditions by adequate intake, and safety – all strongly suggest for phytates inclusion as an essential nutrient, perhaps a vitamin." The paper concludes that inclusion of phytates in our diet for prevention and therapy of various ailments, cancer in particular, is warranted.

Although phytic acid binds a small percentage of minerals in our diets, phytic acid is not something that we should be concerned about. Our leading plant-based health authorities all agree that we don't need to be concerned with becoming mineral deficient as the WAPF warns. "Although in the past concerns have been expressed regarding intake of foods high in phytates reducing the bioavailability of dietary minerals, recent studies demonstrate that this so-called 'anti-nutrient' can be manifested only when large quantities of phytates are consumed in combination with a nutrient poor diet."

For more information regarding the dangerous and misguided recommendations of WAPF, click on the links below:

(2) Reflections On The Weston A. Price Foundation

(3) Fanciful Folklore Is No Match For Modern Science

(5) The Smoke and Mirrors Behind Wheat Belly and Grain Brain

(6) The Paleo Diet Is Uncivilized

(7) Early Man was not a Hunter-Gatherer

(11) Primitive Nutrition 24: In Defense of Beans

(15) The Truth about the Weston Price Foundation

(16) Uprooting the Leading Causes of Death