Many men think eating plants is "wimpy" because real men hunt, kill and eat meat for its presumed "superior" (muscle building) protein. On the contrary, a plant-based diet boosts virility/fertility, enhances athletic performance, and supports optimal health and a youthful physique. In fact, the results of a study published in the British Journal of Cancer revealed that - on average, vegan men had 13-16% higher testosterone levels  than men who consumed meat regularly. Body builders can also achieve the same results as their meat-eating counterparts in the gym without the adverse health effects from eating meat.

The belief that meat is a superior masculine food permeates most gyms, athletic events and bodybuilding websites. Yet despite the growing evidence supporting plant-based nutrition, most men are unwilling to forgo eating meat due to the fear of losing their masculinity. 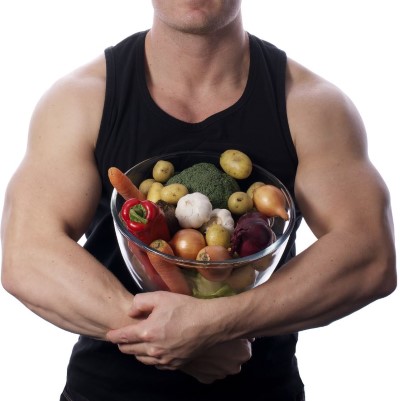 Then Why The Little Blue Pill?

It's not possible to watch TV without being subjected to numerous commercials devoted to one of the most common conditions for American men today. At nearly $30 a pill, drug companies are making a fortune from selling "the little blue pill," Viagra. The popularity of this drug reveals how prevalent erectile dysfunction (ED) is among men today. If consuming meat supposedly promotes strength and masculinity, then why does ED affect 52% of men over 40 with the rate increasing significantly with age? Shouldn't meat preserve and boost manliness? Surely, years of tossing a steak on the grill has nothing to do with this condition; it must just be a consequence of aging!

Contrary to popular belief, this condition is not a consequence of aging. It's also seen in younger men who are obese, and/or have medical conditions such as hypertension, heart disease, diabetes, elevated blood lipids, and an enlarged prostate - all of which are diet-related. A recent article in the Harvard Health Letter noted that "up to three­ quarters of men with cholesterol-­narrowed coronary arteries have some degree of erectile dysfunction. Dr. Michael Greger's video Survival of the Firmest explains the reason why young men should care about their cholesterol levels.

There are many factors that must be examined when considering taking these drugs:

Which Foods Damage Our Endothelial Cells?

The health and performance of our endothelial cellsis determined by the types of food that we eat.High-fat meals containing meat, dairy, refined vegetable oils and processed sugars damage these cells and promote inflammation. Damage can occur to the vessels after consuming just a single high-fat meal. Consequently, blood vessels are vulnerable to spasm, and can become inflexible and/or paralyzed,which impairs the flow of oxygenated blood. This condition can last for 6 or more hours.

Saturated Fats From Meat-Dairy-Eggs Produces "Sludging" of the Blood 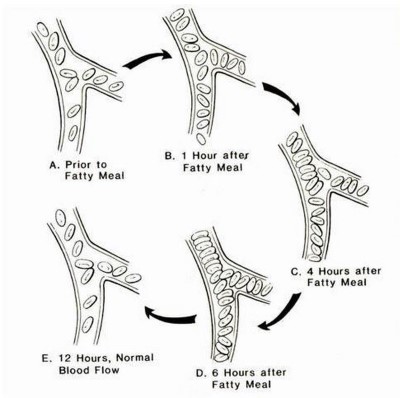 Popular low-carb, high-protein diets (Atkins, Paleo) reduce blood flow to the heart by 40% whereasblood flow improves by more than 40% in those that consume a low-saturated fat diet. A demonstration of this can be seen here. In fact, researchers at Harvard recently looked at one hundred thousand people and concluded that low carb diets were "associated with higher all-cause mortality, higher cardiovascular disease mortality, and higher cancer mortality."Dr. Greger's video Atkins Diet: Trouble Keeping It Up explains how high-protein diets cause erectile dysfunction.

Approximately one hour after consuming a high-fat meal, fats from the gut enter the blood stream and coat the cells, preventing the cells from repelling one another. As they come into contact with one another, they stick together and form clumps. The clumped blood moves very slowly promoting the formation of clots. Six hours following a high-fat meal, as the clumping formation progresses, the sludging can "become so severe that the flow of blood stops entirely, and the overall oxygen content of the blood falls. Tissues deprived of nutrients and oxygenfor even short periods of time will die. "After the clumps break up, the flow of blood returns to the tissues, although this can take 10-12 hours. Watch how blood cells become coated with fat which impairs circulation here.

According to Dr. John McDougall," If eating muscle turned into body muscle then most men living in affluent societies would resemble bodybuilders without a noticeable potbelly. Research shows that eating meat, poultry, and dairy foods (saturated fats) decreases male potency. But, the American diet diminishes sexual performance and masculinity in many additional ways. The male hormone testosterone that determines sexual development and interest has been found to be 13% higher in vegans who eat no animal products of any kind. During a man's reproductive years meat-eating decreases ejaculate volume, lowers sperm count, shortens sperm life, and causes poor sperm motility, genetic damage, and infertility. Meat-eaters are likely to become impotent because of damage caused to the artery system that increases blood flow during intimacy. Erectile dysfunction is more often seen in men with elevated cholesterol levels and high levels of LDL 'bad' cholesterol—both conditions are related to habitual meat-eating. Later in life, men who follow a meat-centered diet face prostate enlargement and prostate cancer. Beef—Real Food for Real Sexual Dysfunction." To view Dr. McDougall's very candid video presentation of these facts, click here.

Additionally, high levels of environmental chemicals concentrated in meats and dairy products interfere with the actions of testosterone. Dr. McDougall writes, "When eaten by a pregnant woman they influence the development of the male fetus, increasing the risk that the baby boy will be born with a smaller penis and testicles, as well as deformity of the penis (hypospadia) and an undescended testicle (cryptorchism). Estimates are that 89% to 99% of the chemical intake into our body is from our food, and most of this is from foods high on the food chain: meat, poultry, fish, and dairy products." 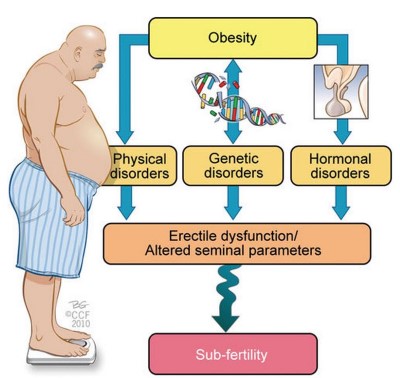 Basically, men who consume meat have lower testosterone levels than their vegan counterparts, take more medications for diet-related conditions, suffer from diminished sexual performance, potency, anderectile dysfunction, are subject to smaller or deformed genitalia in utero, inclined to halitosis/body odor, have enlarged prostates which makes urinating difficult, and tend to be overweight/obese - which elevates estrogen levels. As Dr. McDougall says, "Now isn't eating meat a manly thing to do!"

Although other factors such as alcohol consumption, a sedentary lifestyle and smoking play a role in developing ED, diet is the most critical factor. Dustin Rudolph Pharm.D. explains how a whole-food, plant-based diet supports healthy arteries in his article Understanding The Ups And Downs Of Erectile Dysfunction." The most successful way to restore a healthy endothelial system resides in adopting a plant-based diet. Studies have shown that individuals who eat more plant-based foods (vegetables, fruits, whole grains, legumes, nuts) have a much lower incidence of ED and metabolic syndrome unlike those who consume a standard diet. In contrast, high-fat diets showed just the opposite and were associated with a greater incidence of ED due to impaired endothelial function. To get a better idea of which foods are high in fat and which are low in fat take a look at the chart below." 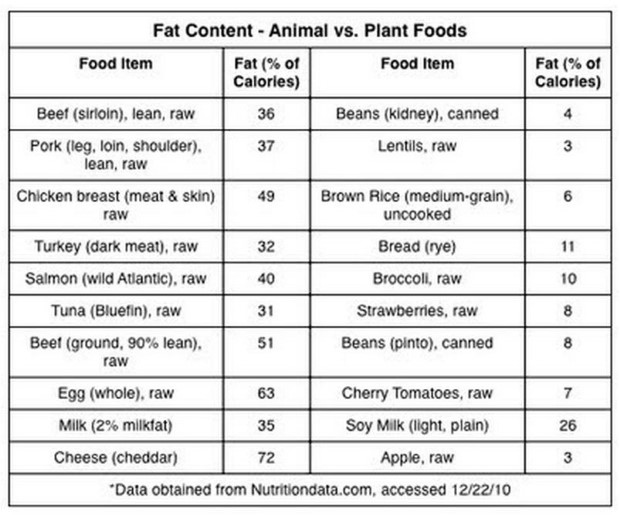 Image from The Plant-Based Pharmacist

The good news is that men are capable of being sexually active for the remainder of their lives if they maintain the health of their arteries. Optimal health depends on optimal blood flow. Poor circulation due to clogged arteries has a detrimental effect on our entire bodies. Men who are in poor health are less likely to be sexually active. Aggressive diet and lifestyle changes can reverse atherosclerotic buildup and restore the endothelial lining resulting in production of more Nitric Oxide, therefore preventing/reversing ED. This begins the moment we stop consuming foods which injure the endothelial cells. Dr. Michael Klaper says "You are as old as your arteries. A person in his or her twenties whose blood vessels have become stiffened and clogged is aged, and at risk for heart attack, stroke and sudden death. If your arteries are flexible and open, bringing life-sustaining blood to your brain and vital organs, you are youthful, no matter what birth date appears on your driver's license." Although the likelihood of ED increases with age, ED is a consequence of damaged arteries, caused by years of being addicted to a rich, meat-centered diet. Our plant-based diet experts say that their male patients (and their wives) many times share their stories of their renewed sexual vigor and vitality. Now that's a great reason to eat whole plant foods!

BTW, My "Athletic" Pinterest board highlights a few elite athletes that gave up meat to reach their goals and gain competitive advantage over their opponent. These athletes have learned that consuming meat is not associated with better performance.

(9) Why do Animal Products Cause Inflammation?

(12) The Demise of Human Sperm

(13) The "Not-so-Manly" Drawbacks from Eating Meat