Could Erectile Dysfunction Save Your Life?

May 20 Posted by Linda Carney MD in Health Articles 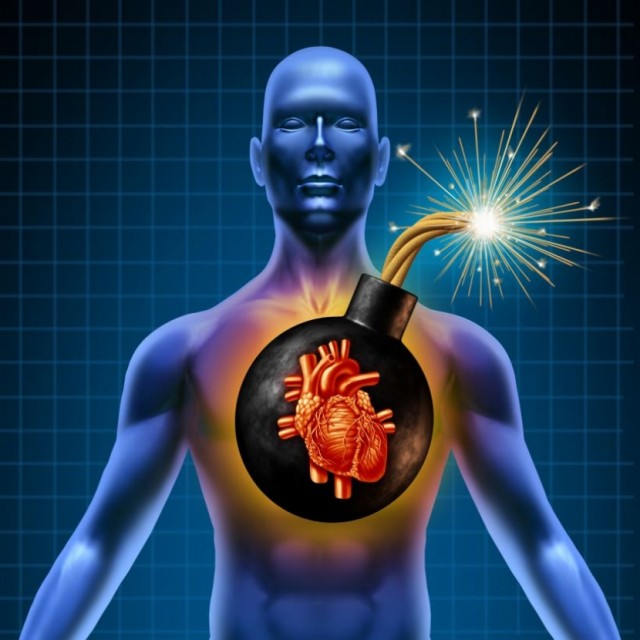 Cardiovascular disease is the leading cause of death in the U.S., (killing one out of every three persons), so it's no surprise that men in the U.S. have the highest percentage of Erectile Dysfunction (ED), since ED is indeed a cardiovascular disease. By the time a man is 40 years of age, half have some degree of ED and the rate increases significantly with age, although it is not a consequence of aging. ED is also seen in younger men who are obese, smoke, and/or have medical conditions such as hypertension, heart disease, diabetes, elevated blood lipids, and an enlarged prostate. It is present in approximately 100 million men worldwide with the U.S. coming in first, with 30 million men. Erectile dysfunction is a SYMPTOM of diseased arteries - a direct result of consuming some version of the Standard American Diet.

Be Thankful for Erectile Dysfunction?

Although erectile dysfunction ED is a troublesome component in an intimate relationship, ED is the first clinical and accurate indicator of an issue far more serious than just being discouraged in the bedroom. If you're a man with ED... be thankful because it could possibly save your life! ED is a powerful predictor for a future heart attack, stroke, transient ischemic attack (TIA), congestive heart failure, cardiac arrhythmia and even sudden death.

At nearly $30 a pill, drug companies are happily making a fortune from everyone's misfortune. Dr. Joel Fuhrman says that the popularity of these drugs is "indicative of the rapid deterioration of the circulatory system in most men in this country."

The vast majority of men love to eat meat, especially meatier muscle like steak. Why is this so? Deep beliefs and emotional attachments to particular foods begin in early childhood, resulting in deep-seated philosophies, images, attitudes, and opinions towards certain foods. A study revealed that men from Western cultures are inclined to eat meat due to their perception of what masculinity and maleness look like, while vegetables are considered to be non-masculine. Consuming meat in public with friends is especially meaningful. It validates manhood and makes men feel good about themselves. Dr. John McDougall says it reinforces masculinity because "killing, butchering and eating animals are associated with power, aggression, virility, strength, and passion – attributes desired by most men." Likewise, most men are unwilling to forgo eating meat due to the fear of losing their masculinity. On the contrary, a plant-based diet boosts virility/fertility, enhances athletic performance, and supports optimal health and a youthful physique.

While men associate meat with masculinity, it comes with several not-so-manly drawbacks. Dr. McDougall explains in this passionate and very frank 4-minute video clip how consuming animal products is attributed to "decreased ejaculate volume and potency, low sperm count, shortened sperm life, poor sperm motility, genetic sperm damage, an enlarged prostate, prostate cancer, difficulties urinating, infertility and the development of a smaller penis and testicles as well as deformity of the penis (hypospadia) and an undescended testicle (cryptorchism) in male infants in the womb of women who eat meat, poultry, fish and dairy." Dr. McDougall also mentions the fact that human males have seminal vesicles as part of their reproductive anatomy. These semen-collecting pouches are seen only in herbivorous animals, no other meat-eating animal has these pouches. In the same way, the anatomy and physiology of the human digestive tract suggests it was designed for a diet consisting of mostly plant foods.

Few men realize that ED is not just a condition involving their SEXUAL health. It's a systemic condition involving their VASCULAR health which affects between 60,000-100,000 miles of diseased blood vessels within their entire body. Achieving and maintaining an erection requires healthy blood vessels that relax and dilate to allow for the increased need for blood flow. Consuming animal products on a regular basis impairs the flow of blood in many ways, resulting in the inability for the penile vessels to respond during sexual activity. 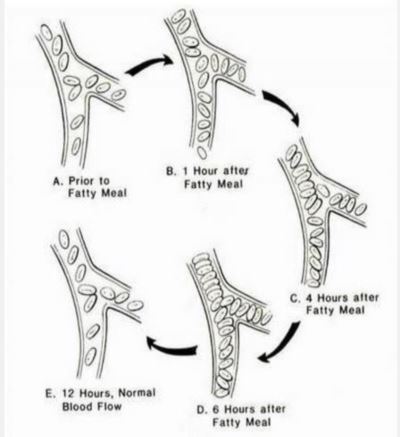 1. Saturated animal fat turns the blood fatty, resulting in "sludging" of the blood. Approximately one hour following a high-fat meal, fat enters the blood stream and coats the cells, making them sticky and clump together. The clumped blood moves very slowly promoting the formation of clots. After 6 hours, as the clumping formation progresses, the sludging can become severe enough to stop the flow of blood entirely in many vessels. This "sludging" can last 10-12 hours. To see Dr. John McDougall's video clip on how saturated animal fat sludges the blood, click here. Men who consume bacon, eggs, and butter on their toast for breakfast, a cheeseburger for lunch, and a pork chop or steak for dinner keep their blood in a continuous state of sludging. Click here to see what fat and greasy blood looks like, demonstrated by Dr. Michael Klaper. This constant sludging results in impaired circulation throughout the entire body, including the penis.

2. ED = Endothelial Dysfunction. High-fat meals containing meat, dairy, refined vegetable oils and processed sugars damage the endothelial cells contained in the innermost layer of all blood vessels. These cells produce a gas called Nitric Oxide which is responsible for dilating constricted blood vessels and initiating increased blood flow during physical and sexual activity. These cells are a crucial component in the ability to achieve and maintain an erection. When these cells are damaged, the production of Nitric Oxide is significantly reduced. Subsequently, without Nitric Oxide, blood vessels that supply the penis become unresponsive and they lose their elasticity and ability to dilate "when the moment is right." Dr. Terry Mason demonstrates how Nitric Oxide "raises the flag" in the Forks Over Knives video clip here. 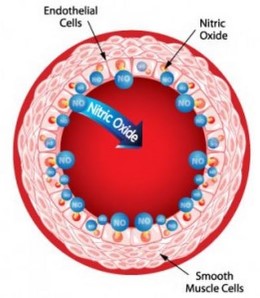 Hypertension, diabetes, and elevated cholesterol also damage the endothelial cells and are a result of habitual meat-eating. Endothelial cells are extremely delicate and vulnerable to injury. In fact, adverse effects on endothelial function and reduced circulation (lasting for hours) can be seen after consuming just a single high-fat meal. Continuous damage to these cells result in significant loss in the number of cells lining the vessels in every inch of our body; which again, includes the penis. The penis contains the highest percentage of endothelial cells in the body. Thus, ED is an important diagnostic tool which detects advancing heart disease. Read our article Is Vegan the New Viagra? for more information.

3. The rich Western diet high in animal products promotes inflammation which encourages cholesterol and saturated fat plaques to accumulate (atherosclerosis) in the walls of the entire vascular system. The steady buildup of plaque produces narrow brittle vessels that lack the ability to relax and expand which is necessary to produce an erection. Vessel walls coated in plaque make it nearly impossible for the few remaining endothelial cells to produce sufficient Nitric Oxide. Atherosclerotic plaque builds, obstructs, and affects every inch of the entire vascular system (including the penis). It's a systemic disorder that uniformly burdens all of the vessels in the body not just the vessels of the heart. Watch Dr. Neal Barnard's one-minute video clip "It's not You, it's Meat" here. Men aren't the only ones affected. Women with elevated cholesterol (and resulting atherosclerosis) also report significantly lower sexual response and satisfaction.

Those that consume popular low-carb, high-protein diets are especially at risk for ED as well as an "increased death associated with higher all-cause mortality, higher cardiovascular disease mortality, and higher cancer mortality." These diets reduce blood flow to the heart by 40% whereas blood flow improves by more than 40% in those that consume a low-saturated fat diet. Watch how these diets impair blood flow by clicking here. 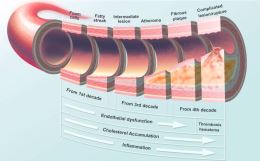 "ED is an early marker for systemic atherosclerosis and is a predictor for coronary artery disease and cardiac events." It's the canary in the coal mine because it's an early sign of life-threatening heart problems. Men with ED are between 1 and 5 years away from suffering a major (many times fatal) cardiac event with the average period being 3 years. Dr. John McDougall writes in his article Eat Yourself Impotent, "The same diet that closes the arteries to the heart (heart attacks) and brain (stroke) also closes the arteries to the penis—the result is erectile dysfunction." The penile artery is about 1 to 2 mm in size which is half the diameter of the proximal left anterior descending coronary artery which is 3-4 mm (commonly known as the LAD or the "widow maker"). Since the penile vessels are smaller, cholesterol from meat, dairy and eggs is most likely to compromise the flow of blood (causing ED) before it obstructs the larger coronary artery (causing chest pain).

According to Dr. Michael Greger, "Men with erection difficulties in their 40s have a 50-fold increased risk of having a cardiac event (like sudden death)." Dr. Greger continues, "A man with erectile dysfunction should be considered a cardiac patient even though symptoms of heart disease may not yet be present. Erectile dysfunction and our #1 killer - coronary artery disease - are just two manifestations of the same disease: inflamed, clogged, and crippled arteries, regardless of which organ. For two-thirds of men showing up to emergency rooms for the first time with crushing chest pain, their penis had been trying to warn them for years that something was wrong with their circulation. The reason even young men should care about their cholesterol is because it predicts erectile dysfunction later in life, which in turn predicts heart attacks, strokes, and a shortened lifespan."

Remaining Sexually Active into Middle age and Beyond

While prescription drugs cover up the symptoms of ED, they do not heal the miles of inflamed diseased arteries throughout the entire body. Dustin Rudolph PharmD, says that often times these drugs don't work, since men with ED have "compromised endothelial function due to years of fatty streaks and plaques building up inside their vessels. The 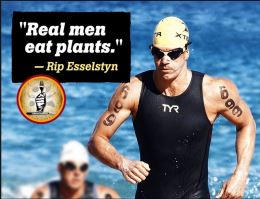 Plants provide plenty of muscle-building proteinmost successful way to restore a healthy endothelial system" Rudolph writes, "resides in adopting a plant-based diet. Studies have shown that individuals who eat more plant-based foods (vegetables, fruits, whole grains, legumes, nuts) have a much lower incidence of ED and metabolic syndrome unlike those who consume a standard diet."

Every part of the body needs sufficient blood to function properly. Men are capable of being sexually active for the remainder of their lives if they maintain the health of their arteries. Making aggressive diet and lifestyle changes can open up the vessels throughout their entire body, therefore restoring normal sexual function and at the same time reversing cardiovascular disease. It must be remembered though, that the benefits received by using a nutritional approach are directly proportional to the changes that are made. Making only small changes, while continuing to eat injurious foods will not offer any significant protection/reversal. This lifesaving information costs less than doctor's visits and prescription drugs and comes with beneficial side effects including weight loss, reduced blood pressure, blood sugar and cholesterol levels (many factors which acerbate ED.)

Our plant-based diet experts say that their male patients (and their wives) many times share their stories of their renewed sexual vigor and vitality after switching to a whole-food, plant-based diet. Now that's a great reason to eat whole plant foods!

(3) The "Not-so-Manly" Drawbacks from Eating Meat

(6) Survival of the Firmest - Erectile Dysfunction and Death