Can Diet be Used to Treat Autoimmune Conditions Like Psoriasis?

Psoriasis is a prevalent and serious inflammatory skin condition caused by an overactive immune system that attacks healthy cells within the body, believing that they are foreign substances. It is just one of 80+ autoimmune conditions. Psoriasis alone affects approximately 7.5 million out of the 23.5 million Americans with autoimmune disorders. Autoimmune disorders can affect one or more parts of the body and is the leading cause of death in women 64 years or younger. Many patients with psoriasis also experience inflammation of the joints (psoriatic arthritis).

If you are suffering from a debilitating autoimmune condition, it is my desire to inform you of your options so that you can be an active participate in planning the course of your treatment. As you will see, conventional therapy involves powerful drugs which offer few benefits and many adverse side effects. Conversely, using food as medicine not only offers powerful protection against developing an autoimmune disease, it can be used to treat it without the enormous cost and side effects associated with drug therapy.

Psoriasis is More Than Just an Annoying Skin Condition

Although psoriasis certainly disrupts the quality of life by causing painful skin eruptions that can crack and bleed, it's more than just a cosmetic skin condition. Scientific studies reveal that patients with autoimmune conditions like psoriasis have a significantly higher incidence of suffering a myocardial infarction (heart attack) while mild cases increase the risk by up to 29%. The good news is that a whole-food, plant-based diet is protective against cardiovascular disease.

Chronic inflammation (which is also characteristic of lupus and rheumatoid arthritis) puts patients at a higher risk of developing atherosclerosis, suffering from a stroke and experiencing a cardiovascular event. Additionally, patients with psoriasis are more likely to develop metabolic syndrome, cancer, osteoporosis, liver disease and depression -- which are also related to chronic inflammation.

Topical medications are safer than systemic medications and can be used for mild to moderate psoriasis, although they still cause significant side effects and could possibly stop working over a period of time.

Conventional treatment for more severe psoriasis involves using powerful drugs (chemotherapy agents) that suppress the immune system. This not only creates unbearable financial costs, it places the patient at a higher risk of developing fatal viral and bacterial infections and even some types of cancers. In fact, according to Dr. Joel Fuhrman's article Can Autoimmune Diseases (like Psoriasis) Be Treated Without Drugs?, "One study found that autoimmune patients with the greatest exposure to immunosuppressive drugs had an almost 5-fold increase in cancer risk."

Additionally, in Dr. Fuhrman's article Drugs for Autoimmune Disease which was previously freely available, he stated, "The U.S. Food and Drug Administration has warned health-care professionals of an increased risk of lymphoma, leukopenia, liver disease, heart failure and opportunistic infections with fatal outcome associated with the use of Remicade. Imuran is known to have mutagenic and carcinogenic potential and cause pancreatitis. A study published in the Journal of Rheumatology followed 1,773 patients started on treatments by rheumatologists for ten years and found a 400% increased rate of cancer in the treatment group in the ten-year period compared to controls."

Drug therapy, Dr. Fuhrman emphasizes, has "not currently shown any long-term measure of success" in treating these conditions. Benefits from these drugs are temporary and are primarily limited to relieving symptoms of the disease. Patients should be counseled beforehand regarding the potentially dangerous side effects from these drugs. Dr. Fuhrman warns, "A recent study in the British Journal of Rheumatology showed the major drugs to treat rheumatoid arthritis, such as Azathioprine, Cyclophosphamide, Chlorambucil, and Methotrexate, increase the likelihood that the person will die of cancer."

For a detailed description of common drugs that are used to treat autoimmune conditions, see Dustin Rudolph's article, Rheumatoid Arthritis - What Is It & How To Treat It.

Nutritional Intervention Comes With No Side Effects and is Highly Effective 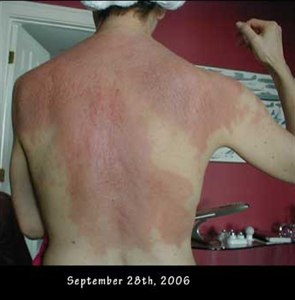 Although numerous studies published in medical journals over the last 20 years have provided ample evidence supporting the effectiveness of high vegetable diets for autoimmune illnesses, Dr. Joel Fuhrman states that "they have been largely ignored by the medical profession and most doctors still deny the effectiveness of nutrition on autoimmune and inflammatory conditions." This is largely due to the lack of nutritional training doctors receive in medical school.

"Nutrition is a powerful and safe tool for preventing and treating autoimmune diseases...[it] should always be tried first, before powerful and potentially dangerous drugs are prescribed" writes Dr. Fuhrman. "Although psoriasis has a genetic component (about one-third of patients have a family history), it is also influenced by what we eat. 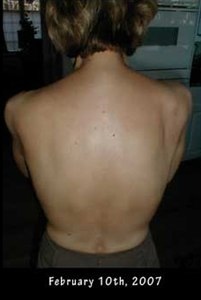 Those with a high intake of green vegetables, carrots, tomatoes, and fresh fruits are less likely to develop psoriasis. Oxidative stress, which can be lessened by these antioxidant-rich foods, is thought to contribute to skin inflammation in psoriasis. Furthermore, psoriasis symptoms have been shown to improve using dietary methods in several scientific studies."

Eating a high-nutrient diet rich in green vegetables, avoiding salt, wheat, refined oils and medically supervised water fasting is part of Dr. Fuhrman's protocol for autoimmune conditions. He has documented and published case reports showing the benefits of water-only fasting. (See the links below.) He says that the only side effects of nutritional treatment are positive ones— enhanced longevity, the elimination of medications and protection against heart disease, diabetes, and cancers. He enjoys seeing his patients recover and "are free of illness as well as the toxic side effects of the drugs."

Other Non-Medication Methods of Relief From Psoriasis

Some psoriasis patients find significant relief through regular sunbathing or using tanning beds for UVB light therapy. However, the condition generally returns with cessation of the light therapy -- and care must be taken not to burn since excess light therapy has been implicated in skin cancer. Swimming in the ocean and soaking in the Dead Sea can also provide temporary relief to those able to do so. For most people water fasting can help clear up psoriasis quickly, but it is not sustainable.

Be Encouraged by These Autoimmune Success Stories!

One such patient, named Jodi, (pictured above) made a complete recovery from her autoimmune condition and is an excellent example of the healing powers of food. Notice the dramatic improvement in just 5 months. In addition to having psoriasis and psoriatic arthritis, she tested positive for several autoimmune diseases including rheumatoid arthritis, lupus, Hashimoto’s and Sjogren’s. In spite of her being under the care of many different medical specialists including allergists, dermatologists, hematologists, rheumatologists, and endocrinologists and taking powerful steroids, Plaquenil, Methotrexate and antihistamines for 20 years, she was still not able to function normally and the drugs were of little help. Read Jodi's story here.

Dr. John McDougall, who has been studying, writing and speaking about the correlation between nutrition and disease for 40+ years has seen significant improvements and even complete recoveries in his autoimmune patients as well. Dr. McDougall states, "Millions of people suffer from autoimmune diseases and their future is hopeless because they are not told about the curative benefits of a low-fat, animal product-free, plant-based diet — and the medications prescribed by well-meaning doctors never cure the disease and have serious side-effects. If you know someone with one of these diseases please tell them to give one month of their life to this cost-free, side effect-free, highly-effective potential cure. (Unfortunately however, once the tissues are destroyed they are usually lost forever. Further inflammation can be expected to stop and progression of the disease processes can be halted with a change in diet)."

For example, his patient, Vanessa, was diagnosed with lupus at the age of 17. Her kidneys were severely affected which nearly qualified her for dialysis and a kidney transplant. She was having cytoxin treatments once a month, taking 60 mg. of prednisone and high blood pressure medication. Four months after hearing about Dr. McDougall and changing her diet, her kidney specialist was amazed at how fast her kidney function was improving. Her doctor gradually decreased her Prednisone, and after one year, she was free from all medications as well as no signs of lupus. See Vanessa's story here.

Another one of Dr. McDougall's patients named Nicole successfully recovered from her crippling psoriasis that affected her joints as well as her skin. See Nicole's story here.

Similarly, Caroline cured her psoriasis after suffering from it for over 35 years. See Caroline's story here.

I have personally had the privilege of successfully treating many patients with autoimmune conditions. For example, after prescribing a customized Starch-Smart® System for Susie, her Crohn's disease has been in remission for MANY years!

These are only a handful of the thousands of success stories seen by physicians like myself that treat their patients using an aggresive nutritional approach. If you'd like to see more encouraging stories regarding how a whole-food, low-fat, oil-free, plant-based diet dramatically improves and arrests the progression of autoimmune disease, type in "autoimmune success stories" in the search box provided on either Dr. John McDougall's or Dr. Joel Fuhrman's website.

Also, see my article How Do Our Food Choices Promote Autoimmune Conditions? to learn how animal protein promotes autoimmune disease along with the additional links below. Visit Dr. McDougall's website and my Starch-Smart® System to see which foods prevent and treat autoimmune conditions.

(4) Nutritional Intervention is Effective for Autoimmune and Rheumatologic Diseases

(5) Fasting: Safe & Effective Use of an Ancient Healing Therapy

(2) Risk of Myocardial Infarction in Patients With Psoriasis

(5) Cardiovascular morbidity and mortality in patients with rheumatoid arthritis